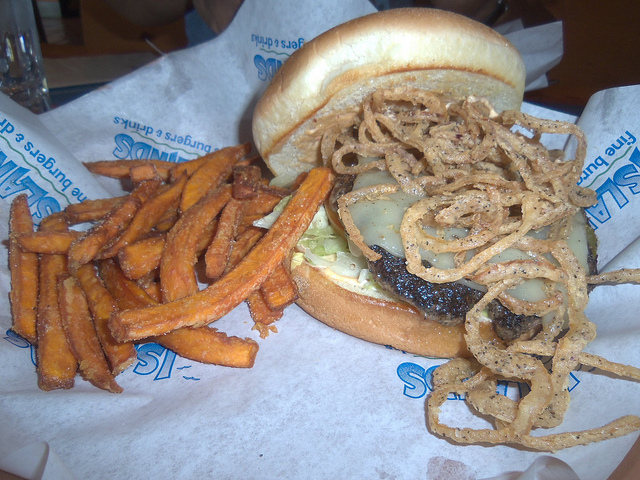 It doesn't even look that good, but we'd probably still destroy this burger and sweet potato fries from Islands (Photo by 44846110@N07 via the Creative Commons on Flickr)

This week's edition of Overheard in L.A. features bits of overheard conversation about food, Tinder and the earthquake.

Overheard of the Week
"I've never felt one that big that lasted for more than a second."
via @danielsrosen

Time To Make Hairnets A Thing Again
"You know it's good when I have hair in my food and I keep eating."
via Laurie L.

But It Is Disgusting
“I would totally eat cheese engineered from my own cultures because, to me, that’s not not-vegan.”
via Lillian M.

Yeah, The Fee Is Your Dignity
"Does Islands have a corkage fee? Or can we bring my own wine for free?"
via @fordgilmore

And Fewer Dickpics
"Oh come on, it's so easy to make your resume. It's just like making your tinder profile, only with like work stuff."
via @samwellpatton

Guessing She’s A Billy Corgan Fan
"So I started a totally low-key conversation with the bartender about Siddhartha."
via Nadine L.

A Good Day To Swipe Hard
"Yo, my tinder profile is so on point tonight. Let's go west, I'm gonna swipe hard."
via @SirNeave

Though Perhaps Unintentionally
"I'd rather be funny than hot, but I'm a little both."
via @MysteryVP

A Well-Liked Man
"Everybody liked him. He had a credit card and he was always exposing himself."
via @JDEFINITEMC

We Live At That Point
"I've reached a point where if it's not covered in bacon, I don't even want it."
via @NathanOcean

This Is Actually A Great Idea, Rose McGowan
"I wish there was a drive thru salad bar."
via @rosemcgowan