Larry King Talks About The Dodgers And His New Sports Program 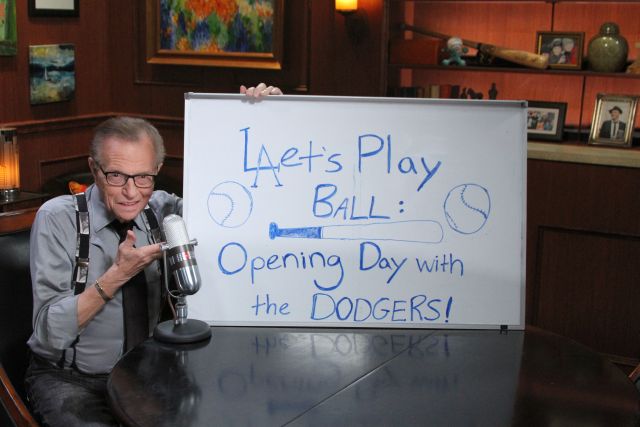 Larry King, reigning monarch of the interview, will be making his debut in the sports world next week.

His new show, "Larry King at Bat," will be one of the cornerstone programs on the Dodgers' new network SportsNet LA, the new TV home for the boys in blue. There have been some pains regarding coverage, as some Dodger fans may have to wait weeks for the opportunity to watch games. But the Dodgers top brass is no doubt hopeful about the network, and King's new show is a step in the right direction.

LAist had the opportunity to talk to King about his unending love for the Dodgers and what he expects from the team this year.

LAist: So first off, tell me a little bit about the show. King: Larry King at Bat features hour-long interview with sports, celebrities and others outside the world of sports on the new L.A. Sports Net network and it'll cove the Los Angeles Dodgers. The show will premiere on March 17. First guest is going to be Orel Hershiser, the Dodger pitcher. And we'll have Kareem Abdul Jabbar, we'll also have Conan O'Brien scheduled.

It's what I've been doing all my life, interviewing, and this will be solely within the world of sports, which I love. It's my avocation. I've been a Dodger fan all my life. To be part of this new network and part of the Dodgers, it's a kick to be able to sit down and ask questions and be part of this brave and exciting new venture.

You mentioned that you are a lifelong Dodger fan. Tell me about your favorite Dodger moment. Well, I grew up in Brooklyn, where the Dodgers played, of course, through the years before they moved to L.A. My favorite moment as a fan, when I was a kid I was at Jackie Robinson's first game. I was sitting out in he bleachers and it was a big thrill realizing that we were part of history. I wasn't a sellout that day, it was 28,000 and the stadium held 34,000. I later in life got to interview Jackie twice, out of the 60,000 people I've interviewed, he was one of the top highlights. So on a personal basis that was it.

The biggest excitement was during the 1955 World Series victory. [The Dodgers] beat the Yankees, who had beaten us in three previous World Series. I still remember everything about the game, and I've interviewed people who were part of that game. They won, two to nothing. We always expected to lose to the Yankees, and [the Dodgers] were up 2-0 in the 9th inning and I had given up. I knew the Yankees were going to score three runs. And the amazing thing to me was how simple the inning went. It was just 1-2-3. It was over in five minutes. Elston Howard hits a ground ball to Pee Wee Reese, Reese threw to [Gil] Hodges, and the Dodgers had won and I went nuts.

There are a lot of high expectations for the Dodgers this year. How do you think the Dodgers' season will turn out? I think all signs point to a terrific year. They're favored in Las Vegas, they are the early pre-season favorite to win it all. If people play to their capabilities, they should prevail. They have a great pitching staff, a tremendous bullpen. They have question marks—there's a question mark in second base, there are some injury questions like when will [Matt] Kemp be able to play, he's still not running as swiftly as he could. So a lot of question marks, but everything has question marks, and the Dodgers have less. They have the best pitcher in baseball, they have the best front line staff, certainly they have the best bullpen. So I'm looking forward to an exciting season and I'm looking forward to opening day.

I have the Larry King Cardiac Foundation, and over the years we've helped thousands of people with various heart procedures. And on opening day with cooperation with the Dodgers, we're going to be giving away tickets to people who are cooperating in our contest. And I will host them on opening day, when the Dodgers host their home opener here. They'll open on the road, they're opening in Australia and then San Diego. And the home opener is on April 4. So with that part of the Larry King Cardiac Foundation, we'll host people. It should be one of the greatest opening days in history, I think. With this special team, at this special ballpark and this great new ownership. It's going to be a great year, I think.

Any specific players that you think will make a big splash this year? Arguably, Hanley Ramirez will be the best hitter in the National League. Adrian Gonzalez is a Gold Glove first baseman and a solid RBI man. Andre Ethier is very dependable outfielder as is [Carl] Crawford. And of course there's [Yasiel] Puig, who was one of most exciting young players in baseball. It's a very solid team. [Dee] Gordon at second base, they got the best pitcher in Clayton Kershaw. It's a team of stars, and stars don't always win, as sometimes there's bad chemistry. But I think this team likes each other. They have a wonderful manager in Mattingly, who was a great player in his own right. I just am so excited now, as I have been in the past. But there's nothing certain in baseball.

Baseball will confound you and disappoint you and drive you nuts. But I have very high hopes for this Dodger team, and my being a small part of it.

More information on the chance to hang out with Larry King on Opening Day can be found here. You can also learn more about SportsNet LA here.