Toxic Lead From Battery Plant Contaminates Soil In Nearby Homes 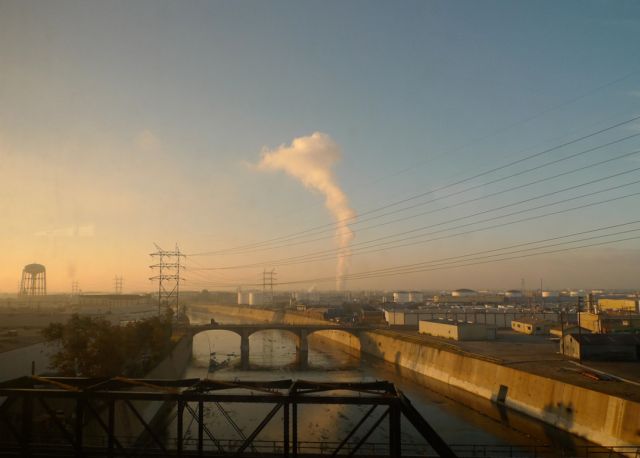 Sunrise over Vernon, where the Exide plant is located. Photo by Britta Gustafson via the LAist Featured Photos pool on Flickr.

The Exide battery recycling plant is still contaminating everything around it. Yesterday the plant was revealed as the cause for high lead levels in the soils of homes and a preschool.

This isn't the first time the Exide plant has been contaminating the area around it. It's become a legendary polluter in the area, and it's become so bad that many residents, as well as California Assembly speaker John A. Perez, are calling for sanctions against the plant.

But so far, nothing has really come from it, save for a temporary closure in April of last year and stricter guidelines in January. The plant has been mandated to find a solution to keep pregnant women and children away from the horrifying toxins its emitting by March 21, according to NBC 4. Meanwhile, a community meeting is scheduled for March 19 at the Resurrection Catholic Church in Boyle Heights, the Times reports.

But don't worry, everyone! All you have to do is wash your hands frequently and refrain from actually touching the soil. Also, don't plant anything into the soil that you intend to eat. Seems reasonable enough.

UPDATE 12:40: Looks like these new test results are finally going to generate some change. The L.A. County Board of Supervisors unanimously approved the creation of a task force today aimed at closing down the Exide plant, City News Service reports.

The Department of Public Health will lead the task force, which will be given 90 days to try to find a way to get rid of the plant. Supervisor Gloria Molina, who worked toward creating the task force, blamed lax supervision from state regulatory agencies as a main cause of these problems.

"We've gone to different agencies and ask that they close [the Exide plant] down,'' Molina told CNS. "All they do is...give them another opportunity to clean up and allow them to make excuses"

"The health of our communities cannot wait," Molina added.