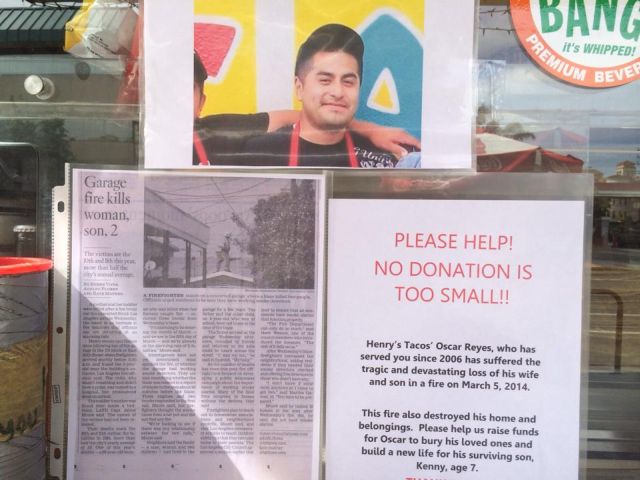 Oscar Reyes, along with a plea to help out his surviving family. (Photo via Henry's Tacos on Facebook)

There has been a sad development in the South L.A. fire that claimed the life of a mother and 19-month-old child. The victims in the fire were the wife and son of Oscar Reyes, the longtime and beloved cook of Henry's Tacos in Studio City.

Reyes was dropping off his seven-year-old son and going to work when he was told about the fire, the Examiner reports. He rushed to the house, but it was too late. Little Dillon Reyes succumbed to his injuries at a hospital, while Oscar's wife Grisela was found dead at the scene, according to a release from the LAFD. The fire was in a detached garage that was converted into a living space and it did not have smoke detectors, according to the LAFD's release.

As of Saturday, Grisela and Dillon's deaths are being treated as homicides, NBC 4 says. ABC is reporting that duct tape was found on the back of one victim's neck.

Now, the owner of Henry's Tacos, Janis Hood, is collecting money for Reyes in his trying time. A GoFundMe account has been opened to collect $2,500 toward funeral costs. She has also been asking for clothing donations for Reyes' surviving son, Kenny.

"[Oscar] is devastated of course, and I want to help him in any way possible." Hood told the Examiner.

The investigation into the fire is ongoing.