Officer Who Shot Unarmed Man Did Not Use Excessive Force, Jury Says 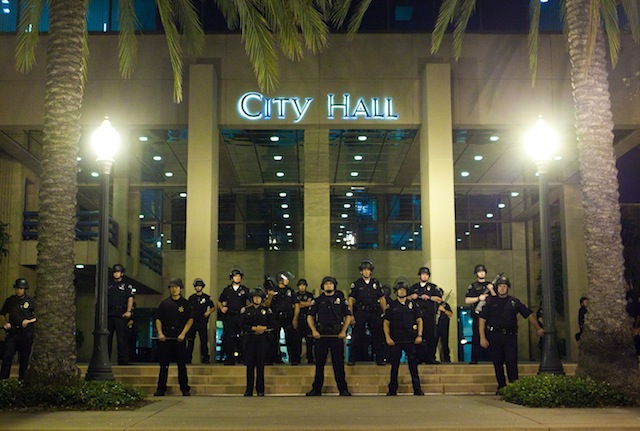 A federal grand jury ruled that a cop who gunned down an unarmed Anaheim man did not use excessive force, rejecting a $5 million wrongful death claim by the man's family.

The jury, who deliberated for only two hours, sided with Officer Nick Bennallack, who claimed that he "feared for his life" when he shot and killed 25-year-old Manuel Diaz, according to the O.C. Register. Bennallack was cleared of any criminal wrongdoing last year in Diaz's death.

Diaz was with friends in July of 2012 when Anaheim police officers showed up. When Diaz ran, Bennallack chased him around a corner, where Diaz turned around with his hands not visible to him. That's when Bennallack shot Diaz—once in the head and once in the buttocks, the O.C. Weekly reports. No gun was found on Diaz's body.

According to one juror, Bennalack had a reasonable suspicion that Diaz was armed because he "was dressed like a gang member," the Register reports. Another juror, after hearing Bennallack's claim that he feared for his life, said, "You have to look at the totality of everything, how things transpired, from beginning to end."

Their attorney, Dale Galipo, claims that the judge allowed evidence against Diaz that was not pertinent to the case, such as the fact that he had methamphetamine in his system and was a known gang member (which is something Diaz's family vehemently denies), according to City News Service. That evidence could have swayed the jurors' decision, Galipo says.

Diaz's death sent shockwaves throughout his community, with many residents decrying the officer's actions. Another Anaheim man, 22-year-old Joel Acevedo, was also killed by a cop the very next day, sparking violent protests against police in the city. That officer, Kelly Phillips was also cleared of criminal wrongdoing in Acevedo's death.

Related:
Video: Watch The Immediate Aftermath Of The Officer-Involved Shooting in Anaheim (Graphic)
Anaheim Cop Justified in Fatally Shooting Man in the Back, Says DA