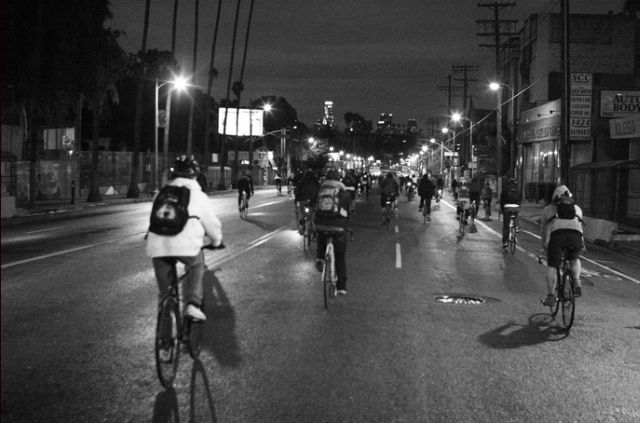 The Marathon Crash Race in 2011. (Photo by Mikey Wally via the LAist Featured Photos pool on Flickr)

The Marathon Crash Race, a pre-dawn bike event that takes place on roads already closed for the L.A. Marathon, has been abruptly shut down after the city threatened its organizers with legal action.

The race, organized by Wolfpack Hustle, has been held each year since 2009 and has grown over time, with 5,000 participants showing up last year, according to Streetsblog.

But a simple cease-and-desist letter from the Bureau of Street Services sent to race organizer Don "Roadblock" Ward on Tuesday changed all of that. The letter claims that if riders decided to hold the race without the proper permits, they would be facing up to a year in county jail, plus fines. Ward tried putting in an expedited request for a permit, but was flatly denied.

The news came as a shock to Ward, who writes on the Wolfpack Hustle site:

This event has been in the planning for at least one year, and builds on a community tradition. To threaten criminal prosecution 5 days prior to the event taking place comes as a shock and disappointment: The city is now demanding permits and payments where it has never done so in the past.

Despite the fact that the race wasn't permitted, Ward has worked with the city for years and a police escort was always present during the race, which makes the decision by the Bureau especially confusing and heartbreaking.

Meanwhile, a commander in the LAPD is saying the race was halted due to public safety. Per the L.A. Times:

"The bottom line is we are trying to keep people safe,” Los Angeles Police Cmdr. Bill Scott said. "When you have an event with a lot of people and it's not permitted, there is a lot more problems."

"Nobody wants someone to get hurt," he said.

But Streetsblog points out that the race was already safe, thanks to Wolfpack Hustle's guiding hand in turning the unsanctioned race into an annual organized event. Meanwhile, some riders are defiantly riding anyway, permits and legal action be damned.

It's a sad end to a fun and exciting part of the marathon weekend.