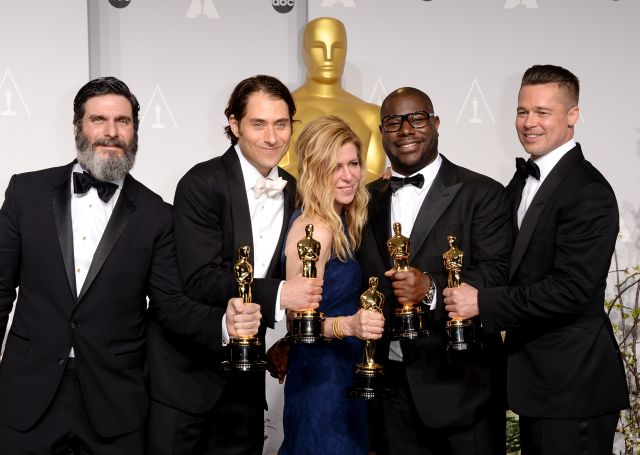 '12 Years A Slave' won Best Picture at the Oscars on Sunday. (Photo by Jason Merritt/Getty Images

If you were watching the Oscars on Sunday night, you no doubt saw Steve McQueen's film 12 Years A Slave take the Best Picture prize. But two Academy members revealed to the L.A. Times that they didn't even see it, claiming that it would be an uncomfortable film for them to watch.

Instead, they voted for it because of the relevance and importance the film, which is a real-life, harrowing account of Solomon Northup's years as a free man captured and sold into slavery in the South.

It's ironic, considering that the job of an Academy voter is, you know, to actually watch these films before making a decision on what's the best of the best. But it's not entirely shocking.

Ellen DeGeneres quipped during her opening monologue that if 12 Years a Slave didn't win Best Picture, the Academy would be racist. It was framed as a joke, but DeGeneres (probably purposefully) hit a troubling nerve: that the Academy's voting is purely political, and the members didn't want to cause an uproar over passing on 12 Years A Slave.

She may be onto something, since the Academy has received flack for not being diverse enough. A 2012 survey found that 94 percent of Academy voters were men, 77 percent were white and the median age of the Academy was 62. Cheryl Boone Isaacs, a black woman, is now the head of the Academy, but those demographics haven't changed much.

The two judges' resistance from watching the film also points to a larger problem: many people skipped 12 Years a Slave because of the subject matter. The Times' Betsey Sharkey points out:

It is arguably the most revered film in recent memory that so few have seen. Those who do watch it often leave theaters in a hush, finding it difficult to explain how they feel about what they've witnessed on the screen.

If anything, McQueen's film has stopped more conversations than it's started. And the silence is deafening.

This whole voting system in no way invalidates the win for 12 Years A Slave. It wholly deserved its Best Picture Oscar. Though, we would've thought those two Academy members would have actually seen the film before they voted on it.