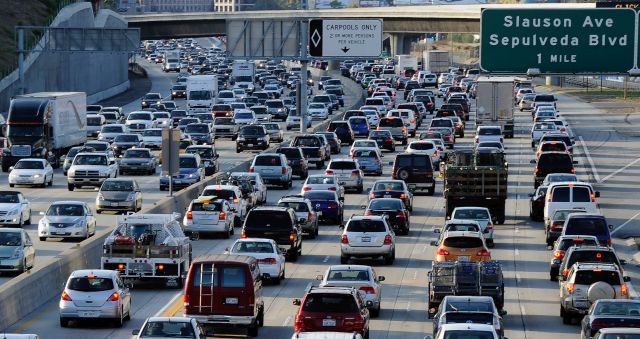 The 405, which may become a nightmare today due to Netanyahu's visit. (Photo by Kevork Djansezian/Getty Images)

Another foreign dignitary—this time it's Israeli Prime Minister Benjamin Netanyahu—is coming to the Westside, which means there will be another round of street and freeway closures in the mix today.

Netanyahu will be in town today through Thursday to attend the premiere of an Israel tourist film, City News Service reports. He's expected to touch down this afternoon and there will be temporary closures throughout his visit that will last about an hour or so in different parts of the city, per KPCC:

"We will be having what we call rolling closures, which means that some of those streets and routes will be closed temporarily for shorts periods of time. And as soon as motorcade passes those areas we will open up those streets and thoroughfares as quickly as possible," LAPD Lieutenant Andy Neiman said.

Fortunately for us, they let us know about these closures, which may be shut down between designated periods of time as Netanyahu makes his way around the city. Here's a list of streets and freeways you should avoid this week and what times you should steer clear: