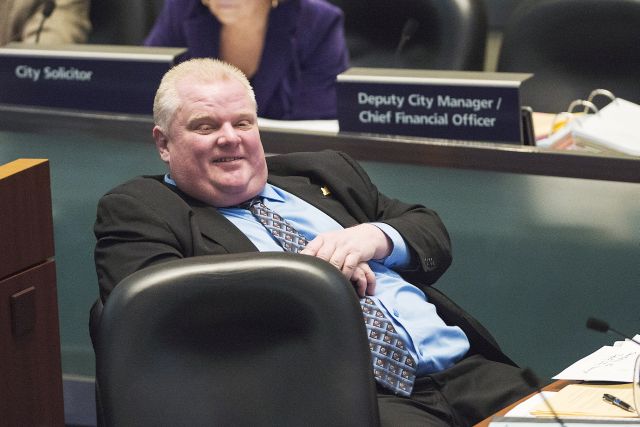 Ford, who made a name for himself by copping to using crack cocaine (among other things), is in town for an appearance on Jimmy Kimmel Live, which will surely go swimmingly for him. He created a ruckus yesterday when he attempted to crash the Oscars, which didn't pan out due to "heavy security." Today, he decided to stop by City Hall to watch our decision-makers in action, KPCC reports.

Thankfully, he shared his day with us via Twitter:

Ford even had time to stop by and watch a budget committee meeting. Look at the expression on his face. We wonder what he's thinking about (probably crack):

Stopping for a quick visit to the #LA budget committee meeting pic.twitter.com/jCl2YtwqlD

The media was dutifully present, surrounding the disgraced mayor and asking him the obvious question: what are you even doing here? Per KPCC:

"Every time I travel somewhere, I always make sure to go to their City Hall. It's a beautiful, beautiful building," Ford told reporters in the Spring Street Forecourt.

And what are his impressions of the City of Angels?

"It's a beautiful city, clean. Very impressed. People are very friendly and gracious, and I want to thank them for their hospitality," Ford said.

Imagine Rob Ford walking the grounds of City Hall, listening to the combination of downtown traffic and the chatter of City Hall employees as he takes in the sights. Maybe he breaks a leaf off a bush and rubs it between his fingers either out of nervousness or to take his mind off of the withdrawals.

If Ford wanted to have a chat with Mayor Garcetti, he picked an inopportune time to do it. Our mayor is currently in Mexico City, far away from the reaches of Toronto's head honcho. Thankfully for our nightmares, the L.A. Times' Matt Pearce put that notion into a frightening perspective:

I just realized Eric Garcetti is in Mexico City, so Rob Ford may actually be the only mayor in Los Angeles right now O_o

Related:
Disgraced Toronto Mayor Rob Ford Is Going to the Oscars and Will Be on ‘Kimmel’ Monday