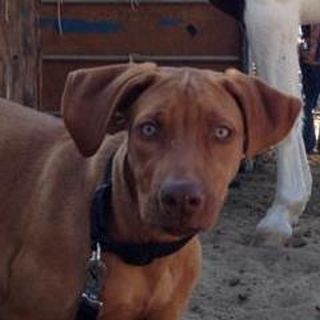 Raffiki. (Photo via the Where's Raffiki Facebook group)
In one of the saddest stories you'll read today, a family is heartbroken after their lost dog was adopted out by a rescue group because they were deemed unfit to keep the pup.

It starts like this: Rosa Torres and her 4-year-old son Daniel's 8-month-old Rhodesian Ridgeback puppy, Raffiki, went missing from their Panorama City home on February 13. Torres tried desperately for a week to look for the dog—she hung up fliers, went on Craigslist and posted about her plight on Facebook—to no avail. But as Torres was pulling out all the stops to find her family pet, Raffiki was found by an animal rescue group called Karma Rescue from the West Valley shelter, the Los Angeles Times reports. Torres had been looking for Raffiki at the East Valley shelter, closer to her home. When Torres found Raffiki on Karma Rescue's site on February 21, she called the nonprofit to get her dog back.

But Karma Rescue already changed Raffiki's name to Kami and shipped her off to a Westside adoption center, where she was scooped up by another family who now wants to keep her after paying a $300 adoption donation. Raffiki was given to her new family right as Torres was filling out the forms to re-adopt her dog

To make things worse, Karma Rescue told the Times that because Raffiki had not been properly chipped and if Torres were more "diligent" in her search, none of this would have happened. So basically, since Raffiki languished in a shelter for a week and wasn't properly registered, Karma Rescue concluded that Torres was unfit to keep the dog.

Raffiki's case raises tough questions about dog ownership and whether microchips are more important than a family's love. The issue has become so heated that one Karma Rescue volunteer quit over the case, alleging "elitism" on Karma Rescue's part.

Meanwhile, Torres is still fighting to get her family dog back:

"I'll compensate the family that has her," she said. "I'll do whatever it takes. She's not just an animal, she's a part of our family. My 4-year-old son cries whenever he looks at her picture. We just want her back."

UPDATE 2 P.M.: Karma Rescue has posted a two-page response to the original L.A. Times article refuting many of the claims outlined in the piece. They also reiterate the importance of microchipping pets.

The timeline of events outlined in Karma's response is heartbreaking: Karma Rescue picked up Raffiki at a shelter on Feb. 20 after Raffiki was there for five days. At 4:57 p.m. on Feb. 21, Torres called and left a voice mail to the rescue telling them that Raffiki belonged to her. At 6:04, the second family was approved to adopt the dog. At 6:54, Rosa emailed Karma Rescue her application to re-adopt Raffiki. Karma Rescue did not receive Torres' initial voicemail until after the adoption was competed. The next day, Karma Rescue called Torres and told her that Raffiki had been adopted, claiming that if she had contacted them sooner, she would have had a better chance to be reunited with the dog.

"At all times, Karma has acted legally, in good faith, and with the best interests of the dog as a priority. LAAS (Los Angeles Animal Shelter) and LAPD confirmed that there has been no illegal conduct on the part of the rescue," the statement read.

Karma also seems to question Torres' claims of Raffiki's ownership in general, saying that among all the social media hubbub against them, Torres has not been involved. Instead, a woman named Lexi Quinn, who runs the "Where's Raffiki?" Facebook page, has been the lightning rod against Karma Rescue.

Karma calls the claims of discrimination against them "particularly insidious" and an "[exploitative] way to solicit support" among advocates for Raffiki. They also addressed claims that the new owners paid a "$300 adoption donation" are misleading, saying that the new owners did not have to pay the fee, rather it was a suggested donation for the rescue to help pay for expenses.

You can read the entire response here: Page 1 and Page 2