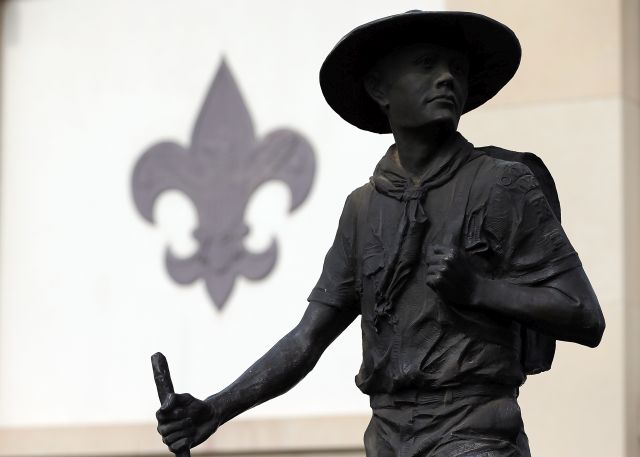 Disney has decided to pull their grant money for Boy Scouts over their gay scout leader ban. (Photo by Tom Pennington/Getty Images

Looks like the Boy Scouts' awful ban on gay scout leaders has cost them the support of another big-pocketed backer: The Walt Disney Co. has decided that they are cutting off their grants to the scouts due to the ban.

Disney's decision to stop giving their "Ears to You" grant money to the Boy Scouts of America was unveiled over the weekend, according to the L.A. Times. A Disney spokeswoman told the Orlando Sentinel that the company does not "operate or support activities that are counter to the policies of The Walt Disney Company," meaning that the scouts' anti-gay practices don't mesh with the gay-friendly entertainment company.

In a letter sent internally thorough the BSA network and picked up by Scouts For Equality, a group that advocates for lifting the ban on gay scout leaders, scout leader Robert Utsey lamented Disney's decision to stop the cash flow:

We recognize that many Scout Units have received financial support over the last several years from this grant opportunity and are sad to see it go. The National BSA Council has reached out to [Walt Disney World] to try to resolve the situation, however, according to [Walt Disney World], their views do not currently align with the BSA and they are choosing to discontinue this level of support.

The entertainment behemoth doesn't fund the Boy Scouts of America as a whole, rather it sends donations to individual troops around the country. BSA spokesman Deron Smith said in a statement sent to LAist that they are disappointed in Disney's decision "because it will impact our ability to serve kids."

While Disney is the most high-profile company to date to pull their support from the scouts, they're definitely not the first. Lockheed Martin, Merck, Intel and UPS have all severed their financial ties with the organization over the gay ban.

The BSA initially had a ban on gay scouts as well, but it was lifted at the beginning of the year due to massive pressure. Hopefully the loss of that sweet mouse money will convince the BSA to lift their ban on gay scout leaders as well.