Meet The Cheese-meisters: Kate Flannery and Scot Robinson of The Lampshades 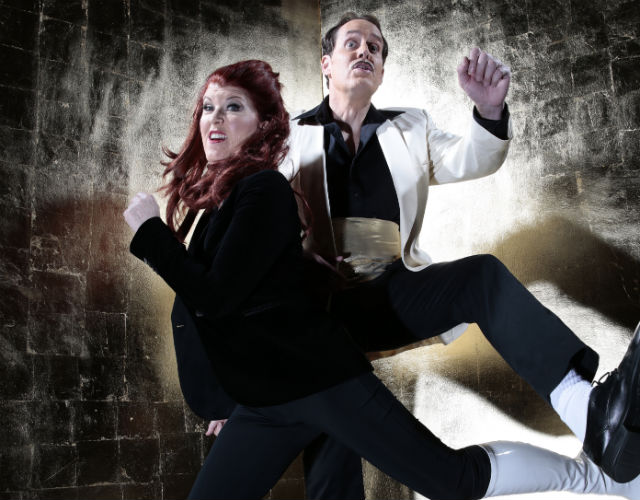 So what do you do next after your hit comedy series—The Office—ends its run after nine seasons? Steve Carrell’s making movies like Anchorman 2 and The Minions while creating a gameshow Slideshow Riot, too. John Krasinski and Jenna Fischer are doing the family thing.

And what of Kate Flannery, who played the laughable lush Meredith? Well, she’s diving headfirst into her second career as a lounge singer. Sort of.

As Kassie Chew, one-half of the fake lounge act, The Lampshades, Flannery takes to the main stage of iO West in Hollywood monthly with partner Hori Pismo (Scot Robinson from Anchorman) to regale audiences with stories and songs that could out-cheese any legit lounge lizard. (Yeah, Engelbert Humperdinck, we’re talking about you.)

The Lampshades have been around forever, with Robinson and Flannery first getting the act together in the early ‘90s, and reviving the duo when they both found themselves in Los Angeles in 2001.

“Basically, when you come see [The Lampshades], you’re seeing a dying lounge act in real time, dealing with the audience,” said Flannery during a recent phone interview. “These are two sad characters are still plugging away, doing the same act over and over again. Much like our songs, we’re becoming the thing we’re making fun of.”

So we just had to ask if their characters were based on L.A.’s most famous lounge act—Marty and Elayne.

“But we may be growing into Marty and Elayne,” added Robinson.

The Lampshades' music isn’t typical torch song fare. They’re known for their mashups like "Mandy" and "Brandy" sung at the same time or “Doves in Your Soul,” where Prince meets They Might Be Giants. So it’s like that.

While Flannery and Robinson plan their set lists in advance, there’s always still room for improv.

“Doing a show for this long, you almost have to improvise in order to reach that same point—to keep yourself interested and to keep it fresh,” Robinson said. “It keeps the audience coming back. For repeat customers, it’s never the same show twice.”

While The Lampshades have Hollywood as home base, they’ve also taken their show on the road, opening for fellow Office-mate Ed Helms, Debbie Gibson, Henry Rollins, The Dan Band, Slipknot and Richard Cheese, among others.

And what’s better yet, they’ll do private parties, weddings and bar mitzvahs, too—as long as the price is right.

The Lampshades are at iO West Mainstage tomorrow (Saturday, March 1) at 8 pm. Tickets: $10.