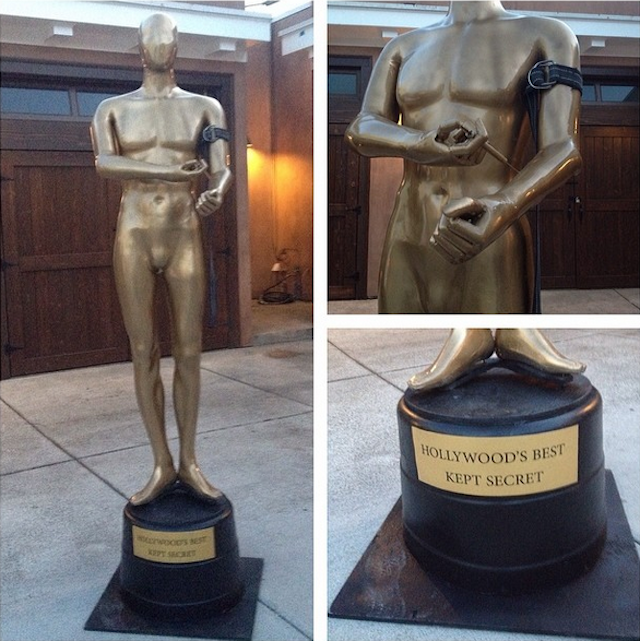 Just a couple of days before the stars hit the red carpet at the Oscars on Sunday, a Los Angeles-based street artist has put up in Hollywood a shocking 8-foot Oscars statue replica shooting up heroin.

Plastic Jesus installed the golden statue that has a belt strapped across its left arm, mid-injection, on Friday morning at the corner of Hollywood Blvd. and La Brea Ave., according to his Instagram account. A direct commentary on Philip Seymour Hoffman's untimely death from a heroin overdose early February, a placard at the foot of the statue reads, "Hollywood's Best Kept Secret."

The artist, who says his cousin and his cousin's wife both died from heroin overdoses, is making giving his take about heroin use in the industry. "When you live in Hollywood and work in the industry, you realize how endemic drug use really is—affecting everyone from aspiring actors and actresses to sound and lighting guys to agents and managers," Plastic Jesus told the N.Y. Daily news. "But it's only when you have a high profile death like Philip Seymour Hoffman or Whitney Houston that it hits the news."

Plastic Jesus is definitely making sure everyone knows he's the one putting up this statue—not Bansky! In one of his tweets, he writes, "Not #Banksy, Plastic Jesus. LA based Streetartist." (Hearing you loud and clear, yo!)

However, don't expect to chase down the statue, as it looks like Plastic Jesus has it safe and sound with him now:

@TheLAScene I had a guy there, said someone who looked like they were from the academy tried to remove it. Its back safe in the studio