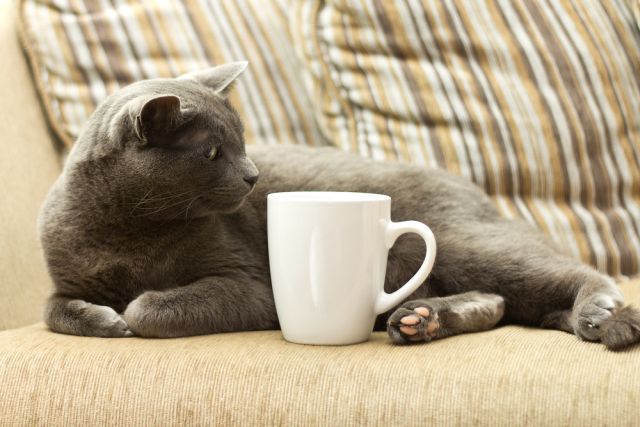 A cat enjoying a nice cup o' joe. (Photo by PhotoPM via Shutterstock)

Imagine you're sitting in a cafe, enjoying your drink or a nice pastry while dozens of the cutest cats you've ever seen frolic around the building. This is not some sort of crazed fever dream, this is a real thing: it's the idea behind Catfe, a cat-themed cafe that might be coming to Los Angeles soon.

Carlos Wong, the entrepurrneur behind the feline fundraiser, got the idea from working in Tokyo for a year, where cat cafes are common and beloved, the L.A. Weekly says. Wong also claims that cat cafes have enjoyed success in South Korea, Taiwan, Europe and Australia, and it's time for Angelenos to share in the furry joy. San Francisco already has one in the works, called KitTea (which sounds adorable)

But before cat lovers across the city rejoice, there's one big hurdle: Catfe needs $350,000 to open, according to their Kickstarter page.

It's all explained in this fun little video:

Despite the steep price tag, Wong expects to open Catfe in an undetermined location in the city within six months (he's been thinking about Little Tokyo or Santa Monica). That's a short window for something like this, but Wong's determination is evident. Wong also got the okay from L.A. adoption centers and county health officials, who advised that the cats should be in a different room than the kitchen. Wong told the Weekly that he may devise a plan to build a glass wall between the two areas.

Wong will also make sure that the cats have an extra room to rest when they're all tired of being loved on. A dedicated staff member will also be on hand to monitor the felines around the customers.

If you want this wonderful idea to happen, drop a dime or two in their Kickstarter.