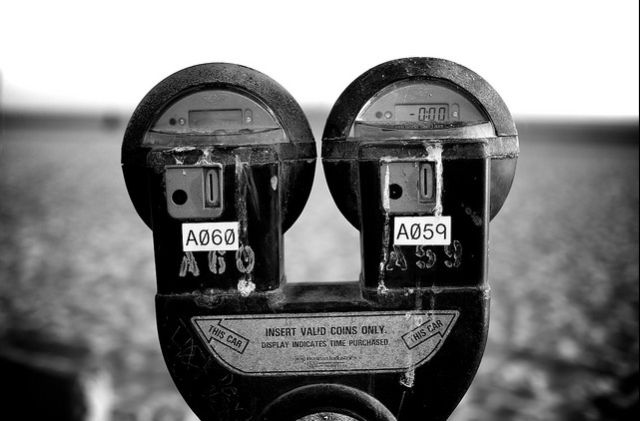 Those awful parking meters. (Photo by Gary Kavanagh via the LAist Featured Photos pool on Flickr)

The parking fines in this city have become thorns in the sides of many Angelenos. Now two men are bravely taking the city to court, calling those fines unconstitutional.

Jesus Pimentel and David R. Welch are both the lead plaintiffs in the case. Their stories are remarkably similar: Both men got a $63 fine from a parking attendant while parked at different meters in downtown, the L.A. Weekly says. Both of their fines eventually ballooned to $175 after a $28 delinquent fee, a $21 collection fee and a doubling of the initial fine after two weeks of non-payment. It was only when the DMV threatened to withhold registration did Pimentel and Welch pay their fines, the lawsuit says.

Now, Pimentel and Welch are fighting back with a federal class action lawsuit, claiming that the massive fines they incurred are unconstitutional and a violation of the 8th Amendment, which prohibits excessive fines. They also claim that the DMV's threat of withholding their registration violated "due process," meaning that they didn't have the opportunity to face the ticket-givers and fight their fines in court, the Weekly reports. Their attorney, Donald G. Norris, told LAist that he believes there might be thousands, if not tens of thousands of Angelenos who have experienced the same issues.

While $175 doesn't seem too unconstitutionally excessive (especially since Pimentel and Welch didn't pay on time), Norris says it's all about perspective.

"We are asking the federal court here to rule that [the constitutional limit of excessive fines] has been crossed," Norris told LAist. "It is excessive to assess such high fines when the offense is failing to put another dollar or two in the meter."

Norris also claims that the fines go above and beyond what the average Angeleno can afford. When one takes into account Los Angeles' median income of $26,096, that cuts down to a daily wage of about $100.37. This means that Pimentel and Welch's parking fines are 174.4 percent above the daily wage, Courthouse News Service reports.

The lawsuit certainly seems like an uphill battle, and we're not sure how well this will hold up in court. We feel that if there's one fine that's excessive, it's the jaywalking fines, which can be $250 even if you pay on time.

Rob Wilcox, a representative for the City Attorney, told LAist that they're still reviewing and cannot comment on the lawsuit just yet.