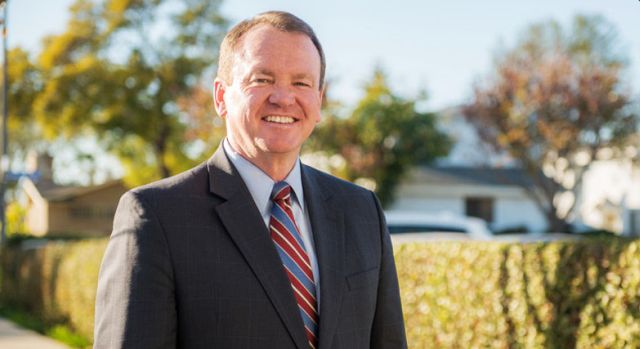 Since Lee Baca's retirement in January, the field of candidates vying for the coveted position of L.A. County Sheriff has exploded with department insiders and outsiders who see Baca's exit as the prime opportunity to strike while the iron is hot.

Jim McDonnell is hoping to stand out from the crowded pack. The current Long Beach Police Chief and former LAPD Assistant Chief can be considered an outsider, since he has never held a position within the sheriff's department. But he feels he has what it takes to run one of the largest law enforcement agencies in the country.

"What I think we need in the culture of the sheriff's department is a fresh set of eyes," McDonnell told LAist. "Someone who can go into a different policing culture and be able to look critically into the organizations for opportunities to improve while at the same time respecting the rich tradition and culture."

Those years in Long Beach have not been completely spotless. Crime dropped significantly last year to the lowest level in 41 years, but officer-involved shootings rose to 15 (excluding accidental discharges and animal shootings) in the LBC, compared to nine in 2012. In further comparison, officer-involved shootings in Los Angeles was at 24 back in November. Those shootings included the death of Tyler Woods, an unarmed man who was shot and killed by police on a rooftop. Woods' family has said that he was on his knees and surrendering when police shot him. In another incident, John Del Real was shot and killed by a plain-clothes officer after they got into a scuffle. Del Real didn't have a gun, but police said he had a metal bat tucked in his waistband and was shot when it looked like he was reaching for it.

As a response, McDonnell set up an advisory committee in December to review the uptick in police shootings. The group includes local community leaders and a member of the ACLU. McDonnell told LAist that the committee was created to take a "wellness check" on how the department handles such incidents and to recommend any changes to police procedures.

McDonnell has compared creating the committee to his work with the Citizen's Commission on Jail Violence, which released a scathing report on the conditions of the jails in 2012. The report criticized Baca's leadership skills and highlighted some of the worst examples of excessive force that took place within the jail system. McDonnell wants to implement much of what was outlined in the CCJV's report if he becomes sheriff, including increased accountability, paying more attention to complaints within the jails and setting up cameras—even on deputy's bodies.

"You got a lot of great people working very hard [in the department], but there have been things missing," McDonnell says. "Systems of accountability, toleration of misconduct, lack of transparency, and certainly no independent oversight to be able to look into the organization to see what is working well and what needs to be changed."

On Tuesday, the Board of Supervisors took another step forward for a civilian oversight commission in the LASD, but there have been criticisms about how effective it can actually be. McDonnell told LAist that he would be willing to work with such a commission.

Prior to taking the top cop spot in Long Beach, the Boston-born McDonnell served in the LAPD for 28 years. At the LAPD, McDonnell rose to Assistant Chief and struck within a hair's breadth of the top spot. When the opportunity to run the Long Beach P.D. came, McDonnell took it and has been there for the past four years, serving as the president of the Los Angeles Police Chiefs Association in 2010 and 2011.

"I believe that the period of time spent at Long Beach has been a period of growth for me, professionally and personally," McDonnell said. "I believe as a result of being a police chief, it has better prepared me to take over the L.A. County Sheriff."

Despite his status as an outsider, it definitely helps to have a list of high-profile endorsements, including LAPD Chief Charlie Beck, former LAPD Chief Bill Bratton and D.A. Jackie Lacey. If he wins this year, he'll be the first non-LASD employee in over a century to attain the sheriff's top spot, KPCC reports.

Another criticism levied at McDonnell is his decision to run relatively late in the game, which has been magnified especially since McDonnell initially decided not to run for the sheriff position a year ago. One of those critics is former LASD commander and political opponent Bob Olmsted, who said that those who have thrown their hats into the ring after Baca's retirement, including McDonnell, are "political opportunists."

"I mean, I can understand where [they are] coming from," McDonnell says when pressed about these criticisms. "I'm running a police department right now. And in looking at that, I didn't believe that it would be fair to the department or the city I was working for to try and take that on. So I think it was a practical decision and it's one I'm comfortable in having made."

The L.A. County Sheriff's Department is one that has taken too many hits in recent years and it desperately needs an overhaul. McDonnell believes he can be the right man for the job.

"I think where it really starts is positive leadership tone from the top," McDonnell says. "When you look at changing the culture, the goal is reestablishing public trust and renewing the pride within the department."

Related:
Sheriff Candidate Bob Olmsted On Why He Exposed The Department's 'Culture Of Corruption'