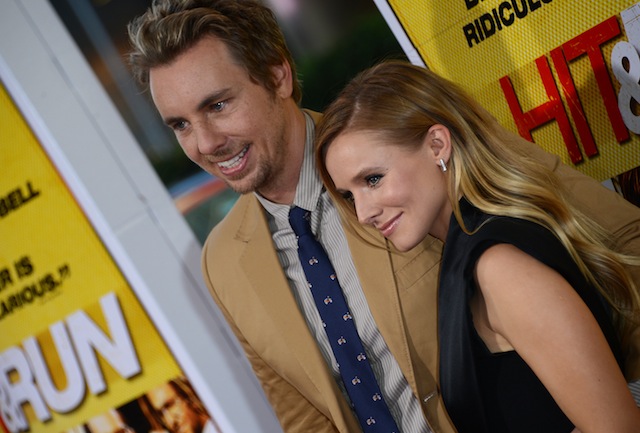 Dax Shepard and Kristen Bell arrive at the L.A. premiere of' 'Hit & Run' on August 14, 2012. (Photo by Michael Buckner/Getty Images)

Bell and Shepard started their boycott in January after a number of publications scored guerilla-style photographs of their new baby. Prior to this, the couple had been notoriously secret about prying eyes peeking into their personal lives. California also passed a law that dishes out harsher penalties for paps who take pictures of famous kids. Now, the very same tabloids that Shepard and Bell targeted seem to be coming around, with Entertainment Tonight being the first to announce their support for the boycott last Friday.

People Editorial Director Jess Cagle said in a statement released today that while they still run baby photos as directed by their parents, unauthorized baby pictures taken by paparazzi will not be placed in the magazine, with exceptions, maybe:

Of course, we still run a lot of sanctioned photos - like exclusive baby pictures taken with the cooperation of celebrity parents, and photos of stars posing with their kids at events (like a red carpet) where they're expecting and willing to be photographed. But we have no interest in running kids' photos taken under duress. Of course, there may be rare exceptions based on the newsworthiness of photos. And there's always the tough balancing act we face when dealing with stars who exploit their children one day, and complain about loss of privacy the next.

Meanwhile, Just Jared released their own statement earlier today officially joining the ban. In a separate statement, founder Jared Eng called himself, "the first blogger to take this stance."

"I'm eager to join this very important initiative," Eng said in the statement. "Kids of public figures have a right to be respected as private citizens, so unauthorized photos will no longer have a place on our sites."

But as Jezebel points out, there are still paparazzi pics of celebrity babies that are peppered throughout both sites. People still has an entire section devoted to the posting of baby pics, and Just Jared, though not as frequent, still has seemingly unauthorized pictures of celebrities enjoying their day with their kids. Mind you, all of these pictures and articles were published before they joined the boycott.

At least Bell and Shepard seem to be satisfied with these new developments:

i'll be proud do my next interview w/ @peoplemag & I'm planning something special around #veronicamarsmovie w/@justjared ! #nokidspolicy

Thank you @JustJared for joining the good guys. We recognize you have the most to lose by taking this stand. Thanks for the integrity.

Meanwhile, it looks like the paparazzi aren't too happy with Bell's boycott, announcing their displeasure in an incredibly creepy manner:

Walking to my car today was met by a bunch of razzi screaming “we got u girl! U can’t hide,we got u!!!”. They LOVE hunting people- 1/2

They LOVE being predators. It’s gross. I wish their mamas would slap them silly. That behavior should NOT be around kids. #nokidspolicy 2/2.