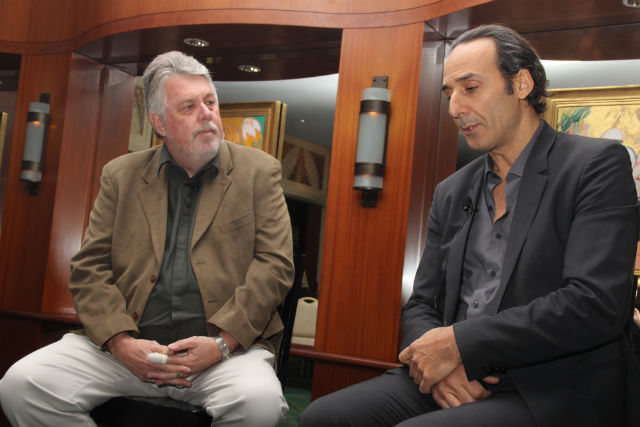 Composer Alexandre Desplat, right, talks about his work on the Oscar-nominated film 'Philomena' at The Beverly Hills Hotel with Ashley Irwin of the Society of Composers and Lyricists. (Photo: Courtesy of The Weinstein Co.)

There’s a pretty good chance you’ve heard the work of Alexandre Desplat—though you may have never heard of him.

The French composer has been steadily adding credits to his IMDB account over the past three decades by scoring numerous films in both Europe and in the U.S. One of his latest projects, Philomena, directed by Stephen Frears, is up for four Academy Awards this weekend: Best Picture; Actress in a Leading Role for Dame Judi Dench; Writing (Adapted Screenplay) for Steve Coogan and Jeff Pope; and Music (Original Score) for Desplat—his sixth Oscar nomination.

On Sunday afternoon at The Beverly Hills Hotel, LAist had a chance to attend an intimate gathering with Desplat to hear about his work on Philomena, a film based on the true story of a young, unwed girl in Ireland whose son was taken away from her by the Catholic church, as well as about his extensive filmography and his process for creating music for film.

Interviewer Ashley Irwin, president of the Society of Composers and Lyricists, kicked things off by asking Desplat which film had first gotten him noticed in America. “Girl with a Pearl Earring,” he replied, but added, “It was my 50th feature.”

Throughout the 45-minute discussion, the two talked about the films that Desplat has composed, from Philomena to Harry Potter and the Deathly Hallows, Parts 1 and 2 to The King’s Speech, The Monuments Men and The Curious Case of Benjamin Button, among numerous others.

The music has to express the “soul of the film” said Desplat. He admitted to having a little difficulty with Philomena. “[The film] is about her, and I hoped to preserve it.” A few times during the presentation, Desplat was able to illustrate descriptions musically, with pianist Randy Kerber or himself playing excerpts.

The discussion also focused on the directors that Desplat has collaborated with numerous times, including Frears, Roman Polanski and Wes Anderson. For the latter director, Desplat has created music for The Fantastic Mr. Fox, Moonrise Kingdom and the upcoming Grand Budapest Hotel. “Wes has his own world,” said Desplat, “like Fellini.”

Desplat told the audience that he’s always wanted to be a composer, and after the conversation ended, we had a chance to ask him what film music inspired him early on. He mentioned three very different films: Spartacus (1960) with Kirk Douglas; the Japanese film, The Naked Island (1960); and, Disney movies.

Watch Desplat talk about Philomena in the video below: