These Photos of Ghost Bikes Will Haunt You

As the number of bicycle-related deaths rises in Los Angeles, including at least one fatality today, a group known as Ghost Bike has been putting white bicycles at spots where cyclists were killed.

From Orange County to Downtown Los Angeles to Riverside, bike fatalities in recent years have been accompanied by installations of ghost bikes, as these photos show. Long Beach resident Danny Gamboa, who is part of the group and took many of these pictures of ghost bikes around Los Angeles and the surrounding areas, has made a short documentary about the ghost bikes and is working on a longer one, according to a piece in the Los Angeles Times.

Ted Rogers, a cyclist from West L.A. who runs the bikinginla.com blog to chronicle bike deaths, said he has seen bicycle-related deaths in Southern California rise to 89 in 2013 from 58 in 2009, according to the Los Angeles Times piece.

“Sometimes it’s all I can do to keep up, and keep from crying,” Rogers told the Times, adding that the city of Los Angeles has been averaging four to five bicycle deaths per year.

Today’s fatality was the fifth bicycle accident in just five days, according to bikinginla.com.

The website ghostbikes.org maps out ghost bikes around the world, as seen in the L.A.-area map below, with the names of victims attached to the locations. 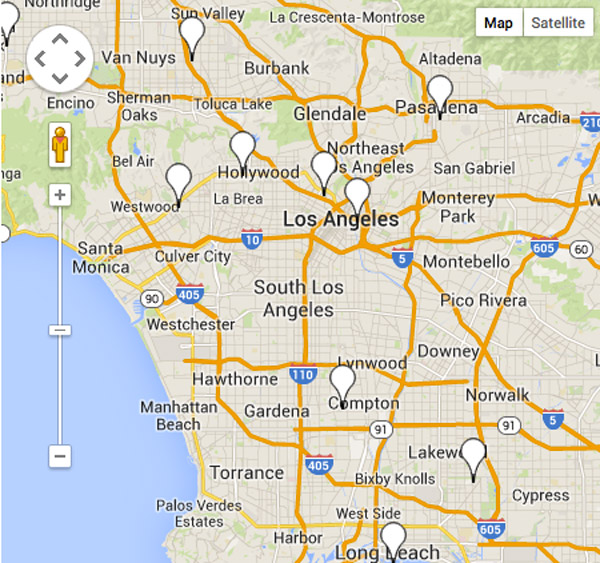 The website says ghost bikes first appeared in St. Louis in 2002 and now appear in cities everywhere. Find out more about the L.A. chapter at their Facebook page.

Related:
The Problems With Riding A Bicycle In Los Angeles