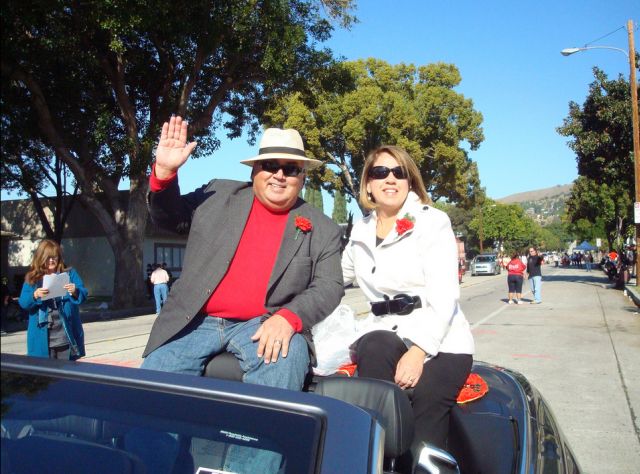 State Senator Ron Calderon during happier times with his wife, Ana. (Photo by Carol Crosby via the LAist Photo Pool on Flickr.)

The hammer of the law is finally coming down on Ron Calderon. Today, federal authorities officially charged the Montebello state senator with 24 felonies, including taking bribes and money laundering involving the film and medical industries.

If convicted on all charges, Calderon faces up to 400 years in prison.

The charges announced by U.S. Attorney Andre Birotte against Calderon are the stuff Hollywood crime thrillers are made of: Calderon allegedly took over $100,000 in bribes from different outlets, including an independent film studio whose head was really an undercover FBI agent. Al-Jazeera America blew the lid off the whole operation late last year in a series of leaked affidavits against Calderon.

"Public corruption is a betrayal of the public trust that threatens the integrity of our democratic institutions," Birotte said in a statement.

The studio head/FBI agent, who went by the name Rocky Patel (which is also the name of a well-known cigar manufacturer), befriended Calderon, taking him out to dinners, events and even a wild Vegas trip. Patel went to great lengths to appear real, even creating a fake and now-deleted Twitter account under the handle @rocky2hollywood to further the ruse.

In return, Calderon agreed to try lower the minimum budget for a film to qualify for a tax credit, from $1 million to $750,000. The swag Calderon received from Patel included $60,000 and a job for his daughter at Patel's fake film studio. Jessica Calderon was paid $27,000 by Patel and didn't even lift a finger, according to Al-Jazeera America. Calderon also allegedly put another FBI agent, acting as Patel's girlfriend, on the state payroll.

Another part of the case against Calderon centers on Michael Drobot, the former head of Pacific Hospital in Long Beach who was regularly taking kickbacks and running a huge healthcare fraud scheme that included paying kickbacks to doctors for referring patients to his spinal surgery clinic. Drobot allegedly allowed Calderon's son Zachary to work with him, paying $30,000 over three summers, during which the younger Calderon showed up only 15 times. Calderon also received golf trips and expensive vacations in exchange for blocking legislation that would hurt Drobot's operation.

Drobot has pleaded guilty and admitted to the feds that Calderon took bribes from him, the L.A. Times reports.

Calderon funneled this bribe money through his brother Tom's nonprofit, Californians For Diversity, which was pretty much just a slush fund for illegal activity. Tom has also been indicted on a number of corruption charges that could land him 150 years in prison.

Calderon faces 24 charges that include three types of fraud (regular, wire and honest services), bribery, conspiracy to commit money laundering and actual money laundering. Tom Calderon turned himself in this morning, while Ron Calderon is expected to give himself up on Monday.

UPDATE 2/24: Ron Calderon has turned himself int authorities, according to City News Service. His arraignment will be at 2 p.m. today.