Ask A Native Angeleno: Where Is The Eastside? 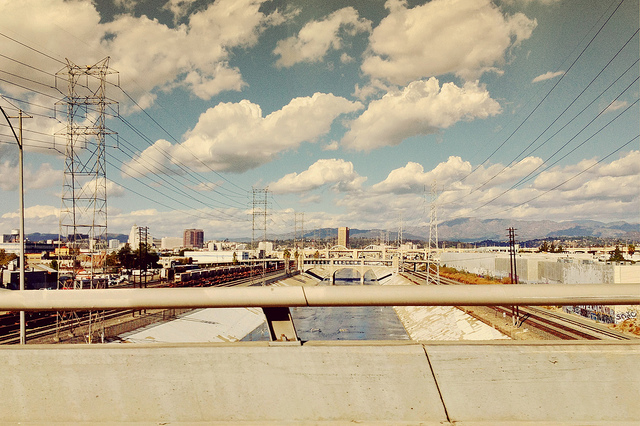 Does the Los Angeles River tell us where the Eastside starts? (Photo by howard-f via the LAist Featured Photos pool on Flickr)

This week's question comes from an Angeleno who's confused about where the Eastside starts. If you have your own burning question for a Native Angeleno, you can e-mail us using the subject line "Ask A Native Angeleno." It's fine if you want to be anonymous, just let us know which neighborhood you live in.

I saw that Silver Lake voted to not be called the Eastside anymore. But that’s crazy! Don’t you think?

Ah, the eastside / westside debate. I can’t wait to read the mail I get on this one.

Yes, the Silver Lake Neighborhood Council, in their infinite wisdom, has voted to designate themselves as officially not the Eastside, setting off a round of debate, a longish Los Angeles Times article that settled absolutely nothing (though it came with a handy interactive map that lets readers decide), and a lot of befuddled looks from the majority of Angelenos, who couldn’t possibly care less.

Perhaps no other question in L.A. is more bitterly discussed than where the Eastside begins and ends. The debate calls into question everything from our relationship with the past to the morality of gentrification to whether we use Google maps or Waze.

Originalists hold that everything east of the “pueblo,” the acorn of civilization that eventually grew into the mighty oak that is Los Angeles, is the Eastside, and everything west is the Westside. Others argue that the true dividing line is the L.A. river—at least this has the virtue of a small degree of objectivity, since rivers are used as geographical borders. This is definition that Wikipedia seems to prefer. But it would place a good majority of the city on the Westside (or at least not on the eastside), including Chinatown, Downtown and Echo Park.

A more moderate approach might use the 101 freeway—after all, isn’t the 101 more of a river to us than our actual river? But it loses points for aesthetics, on account of it being diagonal.

There’s another moderate approach, advocated by Mayor Eric Garcetti in the Times piece, that we call everything east of Downtown the uppercase Eastside, and the newish, whitish parts like Echo Park and Silver Lake the lowercase eastside.

Personally, I detest this solution. The whole point of these silly labels is to help us communicate with each other. For example:

“Sure but I have to work late, can we do it on the eastside?” (Translation: if I have to drive to Culver City I’m gonna put a gun to my head, can we please hang out in the tri-hipster area?)

All labels, and indeed, all words, are reductive. But they’re useful in that they help us talk with each other, and ultimately, to connect as human beings.

Personally, I would favor designating Vermont as the great dividing line. It’s a less satisfying border than the 101 or the river, but it has one very important virtue: looking at a map, Vermont is when the streets start to skew (actually, it’s Virgil, but Vermont is close enough). West of Vermont, streets run perfectly north-south. East of Vermont, they run diagonal. Using Vermont as the border is aesthetically pleasing, but more than anything, it just feels right. If you were to fold the City of L.A. into three parts, Vermont would surely be one of the creases.

Of course, this solution pleases exactly no one. But hey, they can get their own column.

Now then, what about the Westside? Here’s where I’d like to advocate a “mid side,” which you might call everything inside the rectangle created by Virgil, La Cienega, Mulholland Drive and the 10 Freeway). The idea, here, is to make sure West Hollywood and Beverly Hills are on the Westside but keep the Grove in the middle.

So the Westside, then, would begin at La Cienega—where, by the by, some of the major streets like Santa Monica and Venice start to slant again, this time towards the pacific ocean.

Interestingly, no one seems to care where the Westside begins and ends. The implications don’t seem quite as ominous. After all, if we abandon our L.A. River-centric conception of LA, are we not rejecting the past? And therefore our Mexican heritage? And if we conflate Silver and Echo Park with Boyle Heights, are we in essence colonizing East L.A. with fixie-riding hipsters?

Perhaps. However. The American West was once considered everything west of the Appalachian Mountains* (including Chicago!). Then when people actually moved west of Appalachia, people had adjust the meaning of the term—after all, how could more than 2/3 of the country be considered “The West”? These labels tend to change, as people move about and the character of the land sifts about.

*A previous version of this post said the Mississippi River, but Chicago is actually just east of the river. The native Angeleno regrets this error, though he admits that he doesn't really follow Midwest geography.