Garcetti Wants a People Mover to Link Metro to LAX 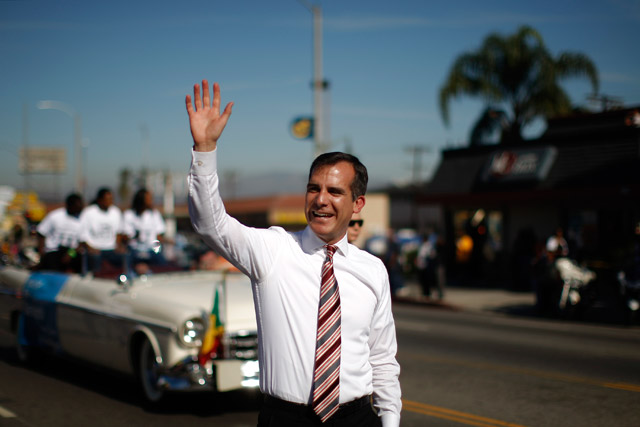 If Mayor Eric Garcetti has his way, a “people mover” will link the Crenshaw Metro line to LAX.

Garcetti also said he’d like to provide more incentives for the local film industry to thrive and bid for the 2024 Olympics while speaking to KABC-TV Channel 7 in a Sunday morning talk show, the Los Angeles Times reported. On the less “sexy” side of things, Garcetti said, he’d like to reform the Department of Water and Power and re-interview top city managers.

The people mover (not to be confused with the old Disney PeopleMover at Tomorrowland) would be similar to what’s already in place between San Francisco International Airport and their light-rail train, BART. This isn’t the first time a people mover has been proposed for LAX, but it comes after local transit officials last month said building a light-rail station at LAX would be prohibitively expensive and dangerous, requiring tunneling underneath the county’s third-busiest airport.

As far as the film industry goes, Garcetti would like to expand the existing film and TV tax credit. And as far as the Olympics go, Garcetti said they’d know by the end of the year if L.A. is in the running for 2024.