Surprise! Our Stretch Of The 5 Is The Most Congested In California

The mighty 5 through Newhall. (Photo by Jeff Turner/Flickr Creative Commons)

When you think of the most awfully congested freeways in the city, three numbers immediately come to mind: 405, 101 and 5. The first two get a lot of flack from traffic-weary Angelenos, but a new report from Caltrans says that the 5 that passes through L.A. County is the absolute worst stretch of freeway in the state.

This is the second year in a row that the 5 topped the list, the AP says. It makes sense, since the 5 slinks its way around many parts of the city, from the Valley to downtown. The findings paint a grim picture for traffic in L.A. County, but it's a picture to which we're all accustomed—four of the most congested freeway stretches in the state lie within our county borders: the 5, the 405, the 101 and the 60. Only the stretch of the 5 that passes through Orange County keeps us from a top five sweep.

Here's an eye-opening statistic to really drive the point home: in 2012, drivers spent 6.6 million hours in traffic on the 5, which translates to 753 years. That depressing stat is based on the amount of "heavy congestion," which translates to traffic that has an average of 35 mph or below, the AP reports.

As a fun bonus, here's the most obvious chart ever created: 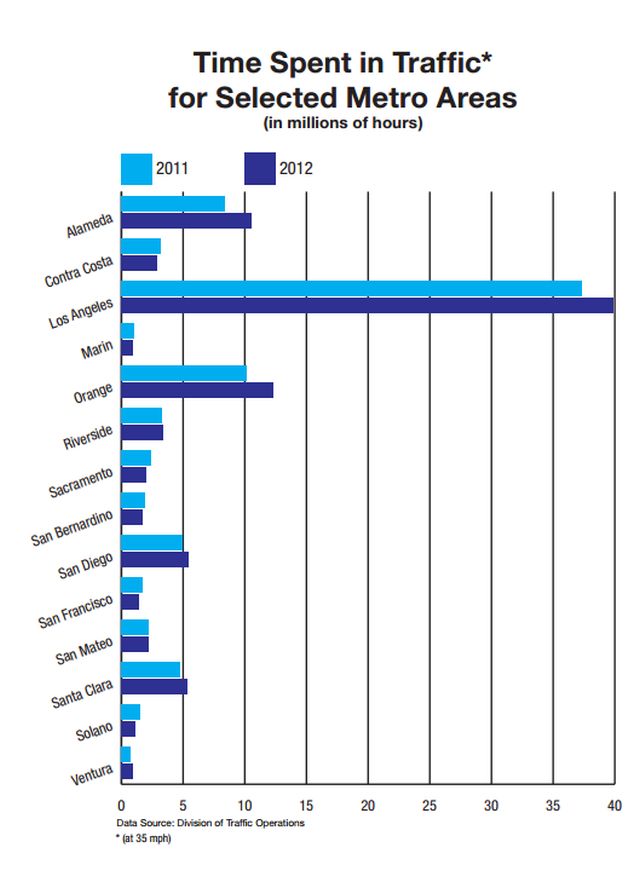