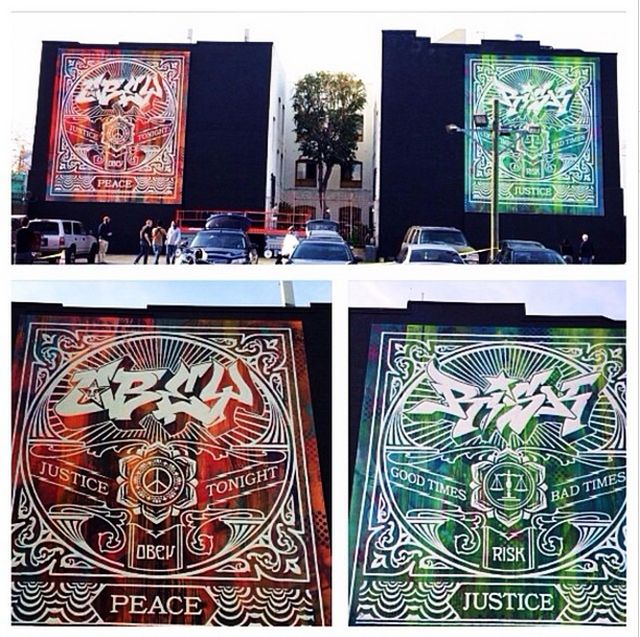 Two murals created by Shepard Fairey (the red one) and RISK (the green one). (Photo via RISK's Instagram)

Take a big look, everyone: these are the first legal murals in the city of Los Angeles in ten years, and they were created by street art juggernauts Shepard Fairey and RISK. The lucky building on which the murals were created is the Rossmore Hotel on the corner of East 6th Street and Ceres Avenue in Skid Row.

Fairey and RISK nabbed the first permit issued by the city (permit #01) last fall and began working on it near the end of last year, finishing up on Monday. The project is a partnership between Daniel Lahoda of LALA arts/Freewalls Project and the Skid Row Housing Trust, a nonprofit that owns the Rossmore, the L.A. Times reports.

The two murals cover two separate walls on the building. Fairey's mural, emblazoned with his trademark "OBEY," is a shiny red with the word "Peace" on the bottom. RISK's mural is greener in color with "Justice" at the bottom. Both murals have been created to make Skid Row a nicer place to live, according to Lahoda.

Lahoda and the Skid Row Housing Trust plan to unveil about 30 more murals in the area by a multitude of different artists in the future.

Los Angeles had the bizarre ban on murals on privately-owned buildings in the books for a decade due to fears of advertisers creating commercials disguised as mural art. Not only has the city ditched the ban, it has also been testing out a relaxation of murals on private homes in certain districts.