The Best Diners In Los Angeles

Diner, coffee shop, greasy spoon—whatever you call it—it's a staple of classic American culture. When you think of diners, you imagine a cozy space with counters, leather-seated booths, and a never-ending pour of coffee. It's a throwback to the 1950s and Los Angeles is a haven for these spots. Our versatile joints whip up traditional breakfast, lunch and dinner fare at any hour of the day, long into those drunken nights out on the weekends. Oh and let's not forget about the homemade desserts (including pie!). Here's our list of our favorite spots. 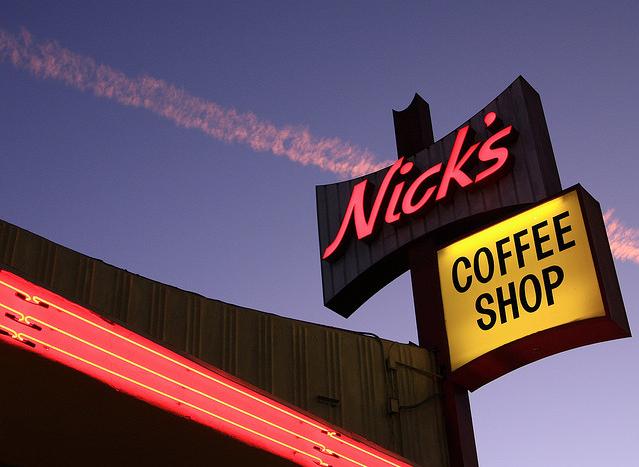 Nick's is the epitome of a throwback greasy spoon. It's a quaint little diner that has an old school wooden counter and classic red booths. Framed portraits adorn any free space on the walls. Go here if you're having a hankering for a delicious, but no-frills breakfast food like a plate of eggs, sausage and hash browns or a large-and-plenty build-your-own omelette. (That doesn't mean though that the menu isn't still huge!) However, what makes people keep returning to this neighborhood spot is the friendly and warm service from the wait staff. 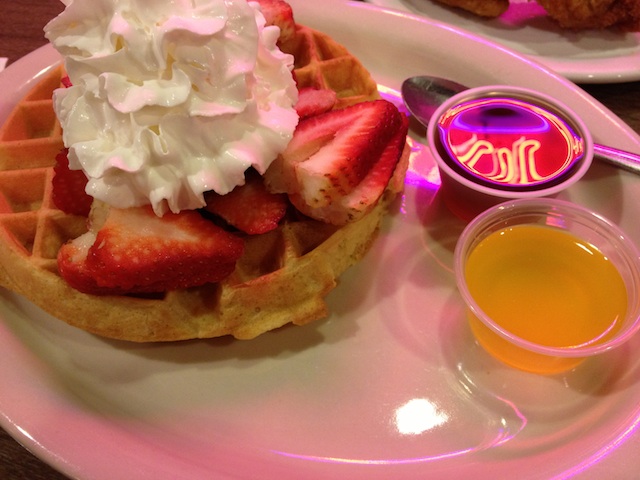 The first thing you might notice about Pann's is its movie-star looks (its Googie architecture and gorgeous neon sign come courtesy of Armet & Davis). Pann's has served as a film location, but not for the one you're thinking of. It's a dead-ringer for the coffee shop in Pulp Fiction, and some of the memorabilia from the movie is here. The diner, like many great American diners, was started by Greek immigrants after World War II, but the menu and the hospitality feel Southern. You can get po' boys, catfish or andouille sausage, but we like the chicken and waffles and biscuits. —Emma Gallegos

Nat's Early Bite Coffee Shop has been in the diner biz for over 30 years, serving up everything you could want from breakfast to dinner and homemade desserts. The spot is homey and you can get a comfy booth to dine in. They've got scrambles with chorizo, hotcakes, and even made their own jam. Plus, you get can muffins warm and straight out of the oven here. 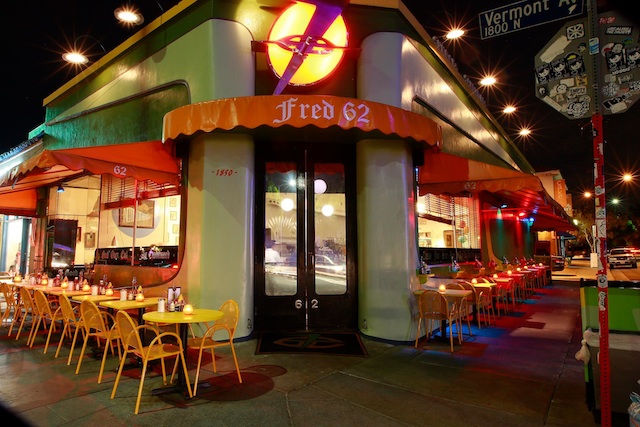 It's great to know that there's a landing pad in Los Feliz where you can grab diner food at any hour of the day (since the joint never closes). Fred 62's classic retro vibe is reminiscent of the diners from the 1950s. It's the kind of place where you can grab an old-fashioned milkshake to go along with your breakfast dishes or a burger. Their menu has had a facelift recently, but you can still get items like the New Amsterdam breakfast sandwich and California omelette. And for the vegetarians, there are plenty of options including tofu chilaquiles and the fried mac n' cheese balls (yum).

When you step into S & W Country Diner, it makes you feel like you've been transported to a sleepy town in the 1950s. A large retro Coca Cola sign and a Route 66 sign hang on a pale green wall, surrounded by red leather booths. This adorable diner is the sort of place where you can get cheap meals. Try their homemade corned beef hash, grits, and biscuits with gravy or if you're feeling like having lunch, they have all the staples like BLTs and grilled cheese. 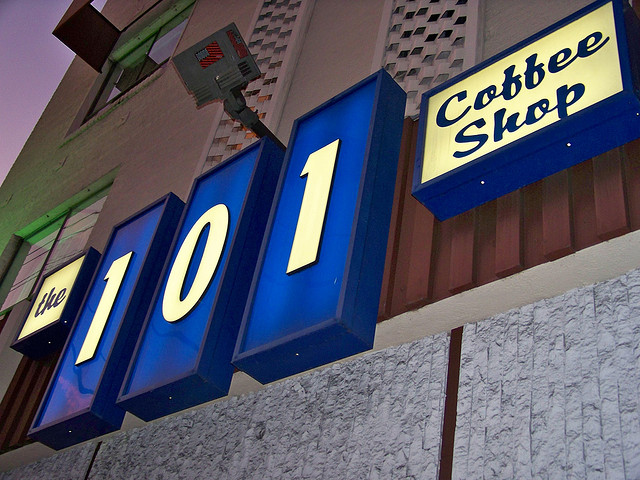 This is one of the new crop of diners that popped up over a decade ago (like Swingers and Fred 62). It lovingly recreates that 1960's diner feeling with its menu and decor, but during the evening it feels a little bit lounge-y. The lights get turned down low, which gives even the regular folks that you've-seen-them-from-something vibe. If you don't make your living in front of the camera, try the brownie waffle sundae. —Emma Gallegos 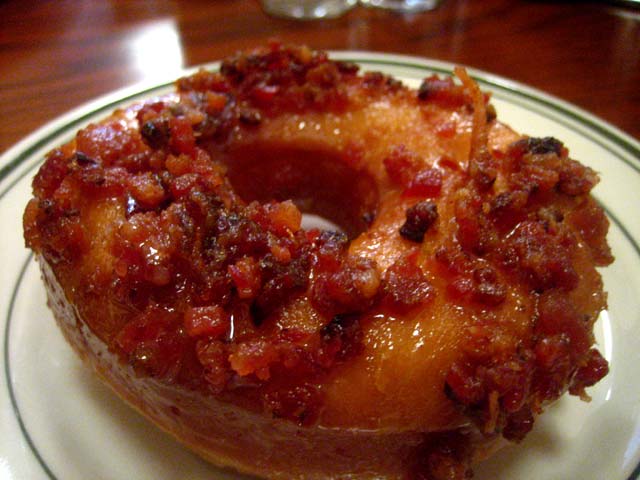 This place is emblematic of the new downtown: like Cole's and all those lofts in the Old Bank District, it's been lovingly restored to its pre-war origins. But let's talk about the delicious food: we like the pulled pork hash with poached eggs and also the catfish with corn cakes and pecan sauce. The dessert platter is the main draw and includes the (rightfully) famous maple bacon donut and home-made versions of junk-food classics, like Pop Tarts and Ding Dongs. —Emma Gallegos 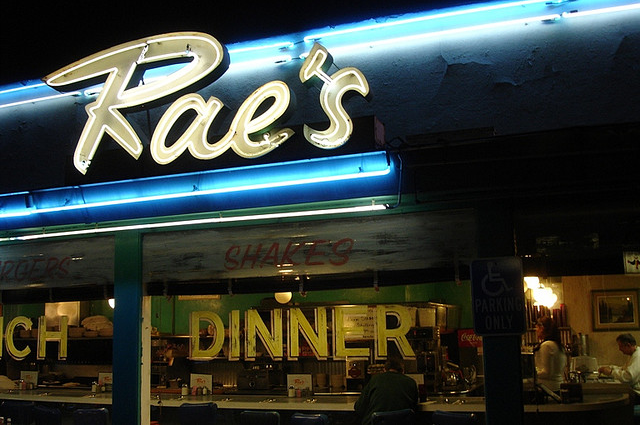 Rae's Restaurant: This is an old-school diner with old-school prices. It's your typical greasy-spoon, but we're especially big fans of the biscuits and gravy. You might recognize it from one of its many appearances in the movies. But be warned: it's a tiny space (and so is the parking lot), so the line can get long on the weekends. —Emma Gallegos 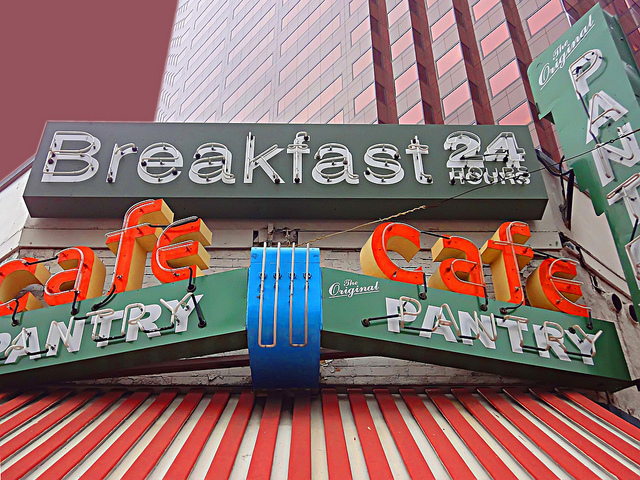 We wish we knew how to quit The Pantry. It may not be the best food in downtown, but we always end up returning again and again through its lockless doors. Maybe it's because it has such a grounding presence in one of the most rapidly changing areas of the city. Or maybe it's that pyramid of grilled sourdough bread slathered in butter that comes with every meal. The 90-year-old diner was bought up by former mayor Richard Riordan in 1981, who fell in love with its ruthlessly efficient service. We like the fact that you never know who you'll bump into particularly during the wee hours. (We're not referring to celebrities so much as the eclectic clientele, which includes people in costumes for whatever is going on down the street at the Convention Center.) —Emma Gallegos 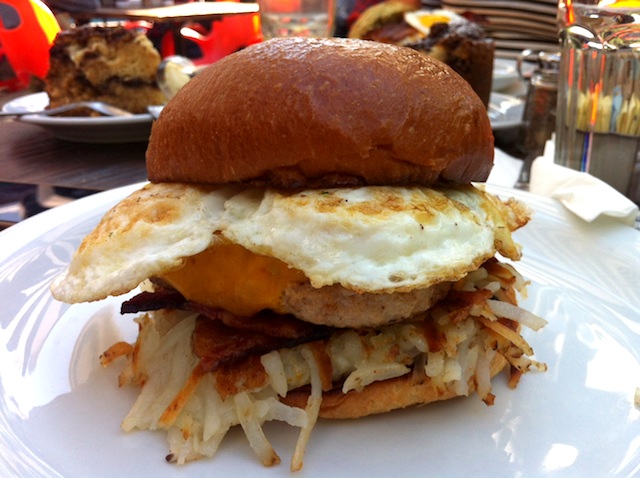 It's been a neighborhood hangout for almost a century, and now it's a mainstay for the late-night crowd spilling out from The Echo on any given night of the week. We've always loved the interior. As Dana Hollister put it: "The wood paneling…it looks like Milwaukee in 1972, and there’s something really fucking amazing about it!" But the food wasn't really quite there. That changed in 2012 when Hollister took over and overhauled the menu. We're fans of the chocolate caramel banana cream pie and A Burger For Breakfast, which is inspired by the McDonald's McGriddle. —Emma Gallegos

This motel coffee shop-turned-Warholian-diner is the perfect place to go after a late night out, and for what it's worth many famous or almost-famous people seem to agree. We always seem to end up at the Beverly Boulevard location after catching a screening at Arclight or the New Bev. The blue corn nachos, the peanut butter and banana shake and the jukebox selection always hit the spot. —Emma Gallegos