Here Are Some Artists Shia LaBeouf Copied For His #IAMSORRY Project 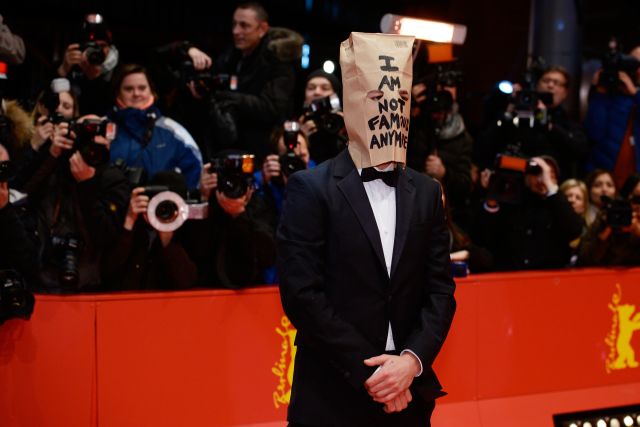 Shia LaBeouf at the Berlin premiere of Nymphomaniac. (Photo by Clemens Bilan/Getty Images)

At this very moment Shia LaBeouf is in a gallery at 7354 Beverly Boulevard in a tux with a paper bag over his head. LaBeouf's newest stop on his worldwide apology extravaganza is a collaboration with Finnish artist Nastja Sade Ronkko and "meta-modernist pioneer" Luke Turner. In this newest project, titled #IAMSORRY, an assortment of "implements," such as a whip from Indiana Jones and a ukelele, have been provided for participants to use as they see fit. It's his latest stunt in the wake of his plagiarism scandal that he keeps bringing up.

This seems like the ultimate proof that LaBeouf wants to turn his fuck-up into some kind of profound performance art. Naturally, this is also a ripoff of other, more important art pieces involving either self-mutilation or mutilation in the form of audience participation.

LaBeouf's newest act is perhaps a most egregious ripoff of a combination of two of Marina Abramovic's pieces. Abramovic is known for "The Artist is Present," in which Abramovic sat in the middle of the Museum of Modern Art in New York City in 2010 and stared at audience members for however long they wanted. It even made some patrons cry. Judging by what LaBeouf is doing, his only addition to #IAMSORRY is his brown paper bag:

Abramovic also debuted "Rhythm 0" in 1974, instructing the audience to use 72 different tools, including a whip, a knife, a gun and a bullet, to use on her for six hours. As the time wound down, the audience members became increasingly more aggressive. In Abramovic's words, "It was six hours of real horror. They would cut me across the neck and drink my blood." We're wondering if LaBeouf intends for his newest project to go this far:

Another famous example that LaBeouf at least partially ripped off is "Cut Piece" by Yoko Ono, where audience members were instructed to cut a piece of fabric from the clothing that a kneeling Ono was wearing until she was left sitting in the middle of the floor in her underwear. Ono was at the full discretion of the audience, like LaBeouf:

In 1974, artist Chris Burden debuted "Back To You," which involved having a volunteer push pins into him while an audience watched. Burden was known for his self-mutilating art pieces, which included being crucified to a Volkswagen Beetle. LaBeouf could likely be going down Burden's route of self-mutilation.

So LaBeouf's newest project may be completely unoriginal, but that shouldn't stop you from checking it out if you really don't like the guy.