5 Questions For Electro-pop Band Royal Teeth: On That Name And Where They Sip Daiquiris In L.A. 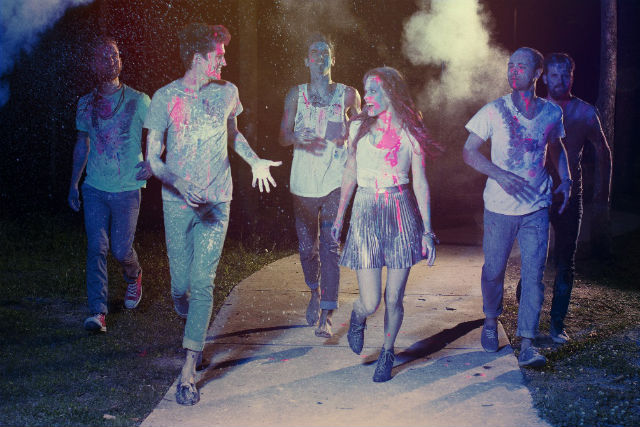 Royal Teeth, a six-piece electro-pop outfit from New Orleans, performs at the Bootleg Bar on Wednesday (Feb. 12) with Chappo and Blondfire. Earning a reputation for their energetic live shows, the band’s touring in support of their debut full-length album Glow, released in August, and their breakout single “Wild.”

Here’s what Larsen had to say about the band’s name, how they try and set their music apart and where you might find them when in LA.

Where does the name "Royal Teeth" come from?

1st band name idea was Royal Bones. 2nd was Candy Teeth. Those are both really bad, so the end result was Royal Teeth.

Looks like you kicked off this tour playing at Tipitina's (a hallowed New Orleans club), and then play the New Orleans Jazz Fest later this spring with SXSW in between. Your bio says you all quit your day jobs in May 2012...how much of a whirlwind has the past 18 months or so been?

It's been pretty crazy. It all happened so fast. Since we quit our jobs, we have been touring and writing pretty much nonstop. It’s been so much fun though. We have this amazing opportunity to put all of our energy into this band, so we’re working as hard as we can.

In Glow, the fun electro-pop is reminiscent of of Capital Cities, Walk the Moon, Chvrches. Do you think those are fair comparisons?

Totally. Those are all great bands.

How does the band try to set itself apart from the rest of the indie/pop pack?

We try not to think too much about being "different." If we think too much about that than I think we put ourselves in a box that we don't want to be in. We are all very passionate about writing songs together and giving each song and sound it's own personality. I think if we are being honest with our music than it will shine in it's own way.

When you come through L.A. for shows, is there a go-to place for the band?

We like to search for different places each time we go there. We've spent a lot of time in Silver Lake, so coffee from Lamill and Intelligentsia were the spots for us. We also love Heywood for a really good grilled cheese. There’s a bar called Five0Four in the city that is New Orleans themed, so we go there to feel like we are home for a night and drink daiquiris.