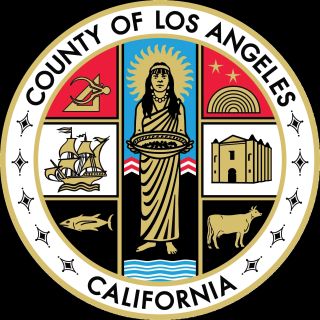 Current seal of L.A. County. Supervisors want to place a tiny cross on the top of the San Gabriel Mission on the right. (Photo via Wikimedia Commons)
The fracas over a tiny cross placed inside the official seal of L.A. County is getting ugly. Now, the ACLU has filed a lawsuit against the county, saying that the cross favors Christianity over other religions.

In an interview with KPCC's Larry Mantle, ACLU of Southern California's Chief Counsel Mark Rosenbaum said that when the cross was first added in 1957, they specifically wanted the cross to represent the Christian faith.

"There is no religious symbol in the history of humankind that is more associated with religion here—the Christian religion—than the Latin cross, and that's what's being put here." Rosenbaum said. "If you look at the mission itself, the bells aren't even on the mission, but the cross is."

From 1957 until 2004, there was a tiny cross placed above the Hollywood Bowl on the right side of the seal. The cross was originally taken off the seal in 2004 and an image of the San Gabriel Mission has stood in its place. At the time, there was no cross on top of the actual mission, as it had been stolen. But now that it has been returned, the county wants to put the cross on top of the mission's image, ABC 7 reports.

Based on this, supporters are claiming that the cross represents historical accuracy and not Christian exceptionalism.

Supervisor Don Knabe responded to the lawsuit, expressing disappointment that the ACLU would go to litigious lengths to keep the cross off the seal:

It is disappointing that the ACLU has chosen to file a lawsuit against Los Angeles County regarding the updating of the county’s official seal. Our motion to add the cross to the County seal was in the name of historical correctness, not political correctness.

Knabe also said that attention should be focused on more important issues instead of "frivolous lawsuits."