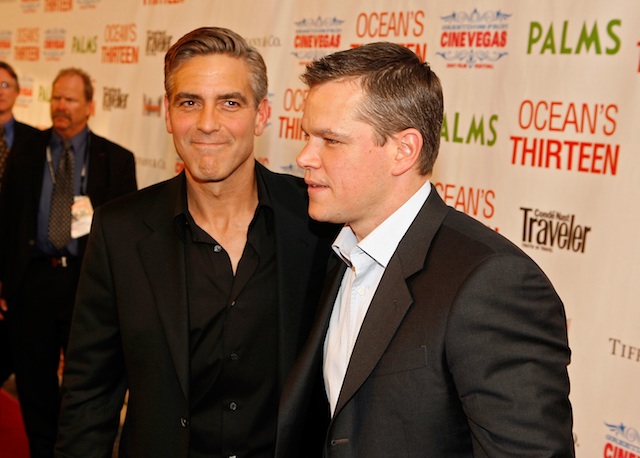 Remember when Tina Fey and Amy Poehler cracked some jokes at the expense of George Clooney and Matt Damon at the Golden Globes? Well, Clooney didn't forget and he played the best prank ever on them, using the unsuspecting Damon as a pawn in his revenge.

The two hosts joked that Damon was "a garbageman" and that Clooney only dates younger women. Fey said during her monologue: "Gravity is nominated for best film. It’s the story of how George Clooney would rather float away into space and die than spend one more minute with a woman his own age."

Clooney revealed his prank when he was in a town hall interview on Entertainment Weekly Radio yesterday along with Damon, his co-star in The Monuments Men. Clooney ordered custom-made stationery with Damon's name on it and wrote a heartfelt letter to the two comedians posing as a butt-hurt Damon.

Clooney described what he wrote in the letter:

It says, "Look, it sounds hypocritical because I laughed at jokes about George and Leo, but that's sort of what people think about them. But when you call me a garbage man it just seems like low-hanging fruit. It seems like an easy joke. I don’t want an apology or anything else. I just want you to know that my kid now calls me ‘the garbage man."

Damon, who wasn't aware of Clooney's prank, received two large fruit baskets from Fey and Poehler with two letters attached to them. The first letter read, “I thought you of all people could take a joke. And listen we’re both really sorry.” (The actor had guest starred with Fey on 30 Rock for a few episodes, so he's friendly with her.)

He read the second letter in its entirety to David Letterman last night on the Late Show:

If your note is part of some George Clooney prank, as I very strongly suspect it is, you A-list amateurs are gonna have to step it the fuck up. We are not some easily confused starlets you’re dealing with here, we are grown-ass professional comedians. Please accept this fruit as a token of our sincerity.

Damon realized that Clooney had sent the two a "wounded letter." "I have no idea how many letters are out there, to how many people," Damon told Letterman.''

However, this might just be a piece of a larger puzzle of pranks coming Fey and Poehler's way. "That’s the appetizer and what’s coming now, the main course, is pretty brutal," Clooney said. "This is downright dirty... I actually have to think if I should do it."

Damon said he's steering clear of Clooney's pranks. He told Letterman about Clooney, "He's a fun guy, a child in many ways."

You can hear the Clooney and Damon interview on Entertainment Weekly Radio interview here:

Here's Damon talking to Letterman about the prank: