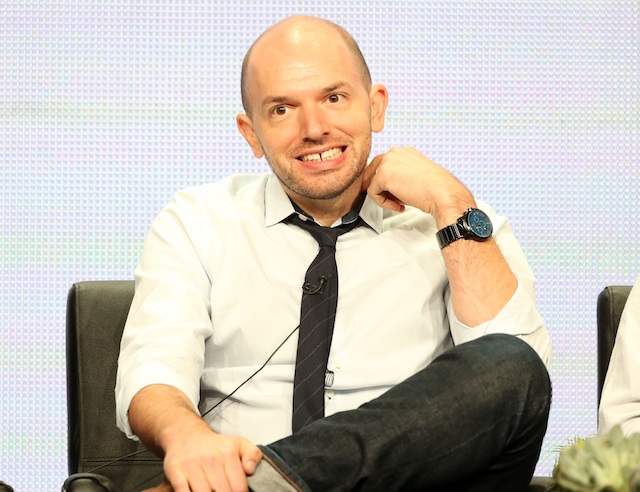 Paul Scheer isn't just playing fantasy football on FX's The League. He's now in the sci-fi comic book business and keeping his comedic chops with it.

Scheer linked up with his writing partner, comedian Nick Giovannetti, and artist Manuel Bracchi to release Aliens Vs. Parker, a four-issue miniseries that's out today on BOOM! Studios. The graphic novel follows a ragtag group of slackers in the future who work for a company called Space-Ex delivering goods. However, things get dangerous for them when they have to send a classified package to a mysterious planet. Think Shaun of the Dead meets Futurama.

The two writers talked to LAist about how one of their characters is based on fellow comedian and Hangover star Zach Galifianakis, how it's difficult reading comic books on the subway and their sci-fi nerdom.

The story of Aliens Vs. Parker:

Paul: The cool thing about this book is that it takes place in the future, in outer space. But our guys work for a company called Space-Ex, which is essentially Fed-Ex but for outer space. So even though they're on a ship and leading this somewhat cool lifestyle, they're basically just UPS men of outer space. These guys have been there a little bit too long and have dreams of doing other things and we're putting them in a situation where they really have to step up. All the things they've always wanted to do and always wanted to become, they have a chance to do that.

Which characters are based on real people:

Paul: Just the aliens because Nick and I have a lot of run-ins with really nasty aliens.

Nick: It was a lot of attention to detail with the aliens.

Paul: A majority of them are all archetypes to the Black-Eyed Peas.

But, in all seriousness, there is a bearded character named Lawrence who is based on a real person—Zach Galifianakis:

Paul: At certain points when Nick and I were even writing the first draft of this, we thought who would be a fun character for this and who would be a fun character for that. That character just kind of grew out of someone who was like Zach Galifianakis before Zach was even big. That's how long we've been working on this movie. We did the movie years ago but recently revisited it to do the comic book. Lawrence was our most fun character for both of us because it was fun to have someone who was super smart but also the dumbest in life, but [has] the smartest brain.

How the idea came about for Aliens Vs. Parker:

Paul: One weekend we were hanging and we had this idea for a movie that kind of had elements of everything we loved about Shaun of the Dead and Aliens. We thought, "That would be a really great movie." We wrote the movie and people were like, "This is great, but people aren't really buying sci-fi movies." It was a very convoluted thing, so Nick and I had this script we really liked but we couldn't really get made, so we had the idea of making it into a comic book.

Nick: This literally has homages all over the place, whether it be Sunshine or Ender's Game; basically everything in sci-fi for the last 60 years. We cover 60 years of sci-fi in this book and we dare anyone to defy us.

Nick: In order to do that, there will be ones we don't even know we put in that you'll have to prove to us that were from somewhere else. We need annotated references about how good we are about our references.

The difficulty of reading comic books in subways:

Paul: I've definitely been reading a lot of comics lately. I've been more of a comic book reader in the last seven to eight years when I grew up. I read a bunch when I was a kid. I've been reading it on my iPad which is really amazing because then you can be reading them on the subway or you can be reading them on a plane and nobody will be like, "Why is that 30-year-old man reading a comic book?" It helps me with my confidence. Sometimes when I bring out those paper-back comic books, I get a little embarrassed. I'm not afraid to admit that.

Nick: I have actually thought that while I was reading a comic book on a subway. I was looking at someone else and was like, "Oh, grow up!" and then got back to reading my comic book.

Here are some sample pages from Aliens Vs. Parker: