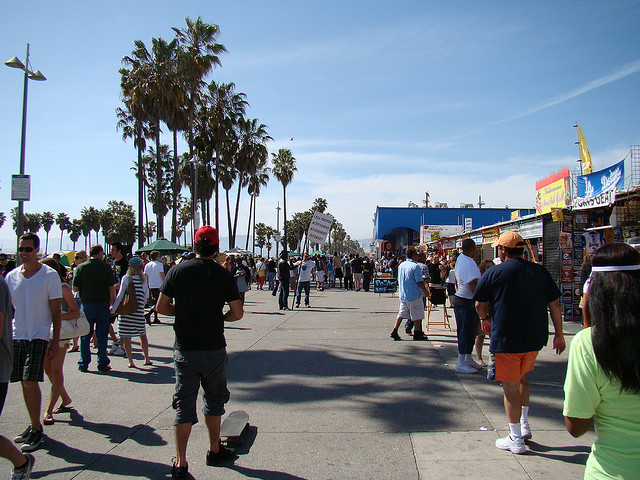 LAPD has increased security measures in Venice Beach after a number of violent crimes have taken place at the popular tourist spot.

As part of a three-month pilot program, bike patrols consisting of ten police officers and a supervisor, will be making their rounds at the Venice Beach boardwalk (a.k.a. Ocean Front Walk) and immediately surrounding areas, according to CBS Los Angeles and KTLA. The program, which launched last week, will have 10-hour long daily patrols starting at 10 a.m. There will also be additional LAPD officers on horseback over the weekends.

The LAPD tweeted out about their patrols:

Lt. Steve Lurie of the LAPD Pacific Division told LAist that the bike detail comes in the wake of two primary reasons, one of them involving two high-profile crimes that took place in the area over the past year. "Secondly, the community has been asking for a more sort of constant and approachable presence on ocean front walk," he said.

The high-profile crimes Laurie is talking about include the death of 32-year-old Italian tourist and honeymooner Alice Gruppioni, who was plowed down by a car on the boardwalk along with 11 other pedestrians on Aug. 3. Her family filed a claim against the city of Los Angeles in January, which is often the first step towards filing a civil lawsuit. According to the lawsuit, the family claims the city "failed to protect against the dangers of a vehicle driving on the boardwalk by failing to have adequate barriers or bollards to prevent nonemergency vehicles from driving on the boardwalk."

The driver, 38-year-old Nathan Campbell pleaded not guilty to murder charges of 16 counts of assault with a deadly weapon and 17 counts of hit-and-run.

Also in December, a video surfaced of two men brutally beating a homeless man with a folding chair in Venice Beach. Suspect Apolinar Celestino Lopez, 30, was arrested on Jan. 5.

There were two murders that took place in November and December in Venice: a 24-year-old restaurant worker who was stabbed to death at the intersection of Pacific Ave. and Washington Blvd. and a man who was fatally shot in a alley between the 4th and 5th Avenues near Vernon Ave. However, these two areas aren't exactly in the bike patrol areas (the restaurant murder is a little more than a block away from Ocean Front Walk) and Lurie said they weren't directly related to the new bike detail. He said though that the goal of the LAPD was to "reduce crime" in general, but the officers couldn't be everywhere at once.