No Plans for a Football Team in L.A. Just Yet 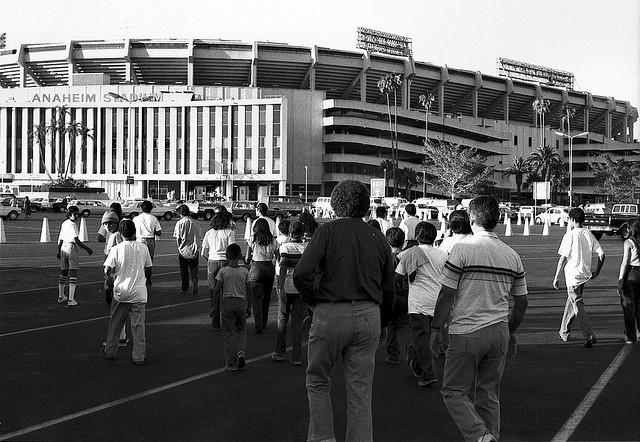 Anaheim Stadium (now Angel Stadium of Anaheim) in 1980, when the Rams started playing there. They previously played at the Coliseum. (Photo by ocarchives via the Creative Commons on Flickr)

The Super Bowl may be upon us, but don’t get too excited at the prospects of us getting our own football team any time soon.

Despite news yesterday that St. Louis Rams owner Stan Kroenke bought 60 acres of land in Inglewood by the Forum and the closed-down Hollywood Park, NFL Commissioner Roger Goodell said in his annual state of the league address before the Super Bowl, “there are no plans, to my knowledge, of a stadium development,” according to The New York Times.

At least 24 of the league’s 32 owners need to approve a team’s move to Los Angeles, but several teams are said to be interested in L.A. Kroenke may have bought the land to help negotiations, one NFL executive said.

The Rams left L.A. for St. Louis after the 1994 season, the same time the Oakland Raiders played their last season for L.A.

Don’t be sad, L.A.—we still have beer flights and pigskin burgers to keep us going while we watch the Super Bowl.

Related:
L.A. Pushing For Not 1 But 2 Football Teams