Weekend Planner: 20 Things To Do In L.A.

LAist gets a lot of event announcements, and we comb through them all to bring you a curated list of what’s happening in LA. There’s too much happening in town this weekend, including these 20 events (and none have to do with the Super Bowl). Read on for all the details.

ART: MOCAtv has a number of events planned at Printed Matter's LA Art Book Fair, which runs through the weekend at the Geffen Contemporary at MOCA. On Friday, The Art of Punk screens at 2 and 3 pm with a panel following at 4 pm. The three-part series, created by Bryan Ray Turcotte and Bo Bushnell, features the art and artists behind the classic logos of Black Flag, Dead Kennedys and Crass. Following the screening, Turcotte and guests present highlights of punk ephemera collected over 30 years. Free.

VARIETY: Elixir - The Show is a free variety show that debuts at its new location, The Federal Bar in North Hollywood at 8 pm. The show includes live music by the funk band Funky Munky. The show also features burlesque, cabaret, vocalists, comedy, magic, dance troupes and audience participation games with prizes. Comedy tonight by Lady Scoutington (Upright Citizens Brigade). Doors at 7 pm, music at 7:30 and the show is from 8-10 pm. Free. 21+.

MUSIC: The Troubadour welcomes the roots, folk and blues sounds of The Wood Brothers with a show at 7 pm. The band—now a trio as Jano Rix joins brothers Oliver and Chris Wood—performs material from their new album The Muse. Amy Helm opens at 8 pm. Tickets: $22. *This show is sold out, so contact your favorite ticket broker for tickets.

MUSICAL COMEDY: At 9 pm, iO West presents Opening Night: The Improvised Musical. It’s a Broadway style musical production that’s made up on the spot, based on audience suggestion. Tickets: $10.

FILM: The Modern School of Film Series takes over the ArcLight Hollywood, featuring films and discussions with musicians, directors, actors and others. The special guests select the movie that’ll be screened in the Cinerama Dome, and participate an hour-long discussion about the film with Modern School of Film founder, Robert Milazzo. The Grapes of Wrath screens at 7:30 pm tonight with a Q&A with legendary actor/singer/songwriter Kris Kristofferson. Tickets: $18.

THEATER: The Visceral Company remounts, by popular demand, Love Craft: Nightmare Suite, six strange tales based on text by H.P. Lovecraft. Conceived and directed by Dan Spurgeon, the stories performed include: "The Statement of Randolph Carter," "The Cats of Ulthar," "The Outsider," "The Picture in the House," "Cool Air and Nyarlathotep." The play runs at The Lex Theatre on Friday and Saturday evenings at 8 pm, with Sunday matinees at 3 pm through March 2. Tickets: $23.

FILM: Art imitates life (or the other way around) when Kestrin Pantera, director, musician and actress got pregnant while shooting the film Let's Ruin it With Babies. She was then under a new deadline of finishing before the baby bump showed. The film screens at Arena Cinema in Hollywood this weekend with Q&As with filmmakers on Friday, Saturday and Sunday, and musical guests and tunes in the RVIP Lounge in the parking lot on Friday and Saturday.

ART: Gallery1988 (East) opens a solo show by Bruce Yan, Brand New: Iconic Brands with a Pop Culture Twist, featuring new originals and prints. The opening reception is from 7-10 pm. The artist will be in attendance. The exhibition will be on view through Feb. 22.

FILM: The Wait premieres at The Downtown Independent on Saturday at 8 pm. It stars Jenna Malone and Chloe Sevigny as sisters, who wait for their recently deceased mother to be resurrected. The family's torn apart by trying to discern what’s real and what’s not. There’s a Q&A that follows with director M. Blash as well as with actors Malone and Sevigny.

SHOP: Skybar at Mondrian Los Angeles hosts Mondrian Market, a weekend pop-up shopping event that brings together artists, beauty and fashion retailers to showcase their lines and offer visitors in-person deals. Held on the first Saturday of every month around the pool deck and in a winter tent, the market runs from 1-5 pm.

MUSIC: Into It. Over It. is a music project by the Chicago-based songwriter Evan Weiss, who’s touring in support of the band’s latest album, Intersections. They’re at The Echo for an early show at 5 pm with special guests: The World is a Beautiful Place & I am No Longer Afraid to Die, A Great Big Pile of Leaves and French Exit. Tickets: $12-$14.

THEATER: SkyPilot Theatre Company presents 10 Minute Benders. Part of SkyPilot’s “One-act/One Location” series, the one-acts take all in the same location. This time around the setting is a dive bar, and the topic include bachelorette parties, alcoholic superheros and beer coolers that lead to alternate dimensions. The plays were written by the company’s resident playwrights and features members of SkyPilot's acting ensemble. Runs on Fridays and Saturdays at 8 pm at Young Actors Studio in NoHo through Feb. 22. Tickets: $20.

MUSIC: The Autumn Defense (Wilco’s Patrick Sansone and John Stirratt) perform at the Bootleg Theatre to celebrate this week’s release of their new album Fifth. Also on the bill: Springtime Carnivore, Jonathan Rice and The Autumn Defense. Show at 9 pm. Tickets: $15. 21+. 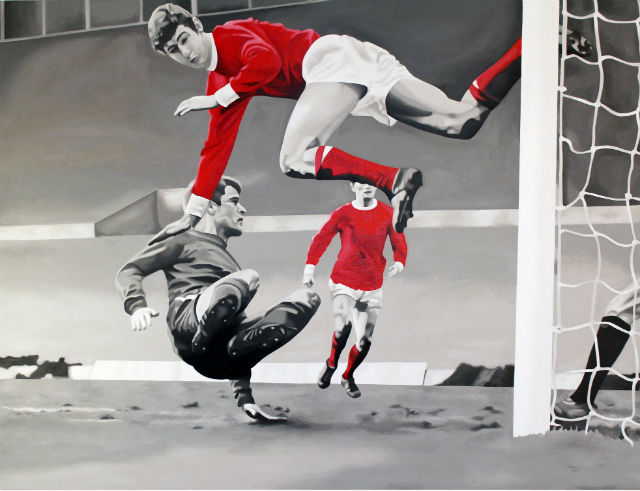 ART: ForYourArt celebrates the publication of More Than You Wanted to Know About John Baldessari, Vol. 1 and 2, edited by Meg Cranston and Hans Ulrich Obrist. More than 50 friends and acquaintances will read from two new volumes of Baldessari’s writings. The event is being held from 1-3 pm at the Democracy Forum at Japanese American National Museum in conjunction with the LA Book Art Fair. **The event is now sold out, but the tickets were free, and this is LA, so you might want to take your chances in the stanby line on Super Bowl Sunday.

ART: LACMA presents the exhibition Fútbol: The Beautiful Game, which features 50 works by nearly 30 artists on the subject of soccer or fútbol or “the beautiful game.” The exhibit examines “issues of nationalism, identity, globalism, and mass spectacle as well as the shared human experience between spectators from a multitude of cultures.”