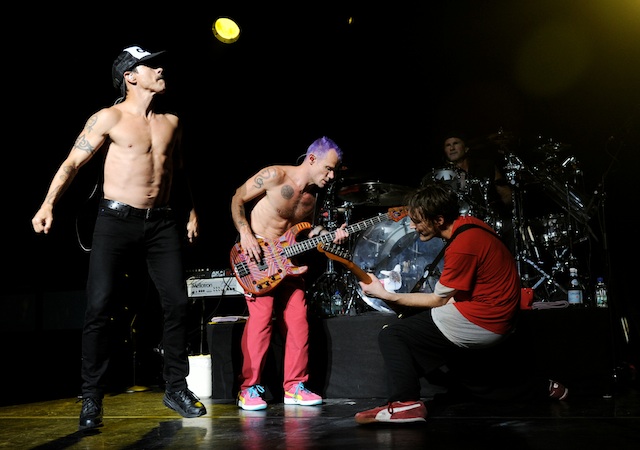 The Red Hot Chili Peppers parody song called "Abracadabralifornia" is floating on the Internet today, and it's so terrible that people are actually mistaking it for a real RHCP song.

Just in time for the band's halftime show performance with Bruno Mars at the Super Bowl on Feb. 2 comes this downloadable track on RCHP2014.com, a website that's made to look like a real RHCP one advertising the big game-day concert.

The hilarious title of the song pays tribute to California and is perfectly complemented by horrendous scatting and nonsensical lyrics from the lead singer (who could very well be Anthony Kiedis in our books). The best gems are the lyrics, such as "I drink an Alabama slammer with your sexy-ass grandma" or "She jammed my butt with a big stick, and then proceeded to be suckin' my dick." At the end of the song, he compares the Target stores and goes into a melodic chorus of "Shopping Carts! Escalators!" The track even gives a shout-out to our L.A. cities like "Bing-a-bong-a-bong-a-Burbank" and "Gle-gle-gle-gle-Glendale."

It looks like this song is coming from the masterminds of Hot Karate frontman Cyrus Ghahremani and co-star and co-writer of The Kroll Show, Jon Daly, according to Crave Online. Daly was a guest star on the Comedy Bang Bang podcast back in March 2013 with Zach Galifianakis, where they talked about their Red Hot Chili Peppers fan club and that they would be making a podcast dedicated to it. Daly went into a couple verses of his "tribute" song to the RHCP, which is the basis for the online track on the RHCP2014.com website (except the official song is fully produced).

You can hear Daly and Galifianakis talking about their fan club on the Comedy Bang Bang podcast below at the 23:10-minute mark and Daly singing the song at 24:45:

Comedian Tom Scharpling was the first to tweet about the song, according to Stereogum, which means he might be in on the joke:

New Red Hot Chili Pepper song is a must-hear. Maybe their worst lyrics yet? http://t.co/Yvj6MALH1I Free download and I want my money back.

Some thought the track was real and others made fun of it:

As a huge fan of The Peppermen, really excited by the new single Abracadabralifornia! Thanks @Dodge and @pepsi! #rhcp2014 #Peppermen

Are the RHCP intentionally becoming a parody of themselves, or is it just happening naturally? Abracadabralifornia? http://t.co/aqDwbZ8Aqz

Red Hot Chili Peppers' new song "Abracadabralifornia" proves no joke we make can be funnier than the real thing. The Rob Ford of bands.

To be fair, "Abracadabralifornia" would hardly be the most ridiculous RHCP song title

What does it say about the quality of RHCP's work recently that people believe that "Abracadabralifornia" is real?

UPDATE 3:25 p.m.: Radio.com interviewed Daly about the prank and he talked about what inspired the idea for the song:

“This song started because me and Zach Galifianakis were at a party with a lot of celebrities, and he was the only person I knew there,” explained comedian Jon Daly in a phone interview, who recorded the parody song and claims to be a Chili Peppers fan since the 7th Grade. “It was really uncomfortable for me, so I went up to [Zach] and said, ‘Flea just texted me and said he’s stuck in traffic.’ Zach immediately said, ‘oh yeah, I talked to [Anthony] Kiedis. He’s parking and should be here soon.’ For the rest of that night, we kept talking like the Chili Peppers were good friends of ours. It was just a dumb bit that we did, and part of the bit was singing ‘Bingabong Burbank’ and ‘G-G-G-G-Glendale.’”

Daly confirmed he got Ghahremani to collaborate with him on writing and producing the song. He also had his comedian friends such as Patton Oswalt and Aziz Ansari help spread the word, which led to these amazing tweets:

What in the hell is going on with the Red Hot Chili Peppers? Um: http://t.co/Xu21Nekymy

Daly was afraid that RHCP would be offended until he saw the band's drummer Chad Smith tweet this out about the song:

The parody track already got 200,000 downloads in 24 hours. Let's hope RHCP enjoy it so much that they do a cover of it at the Super Bowl!