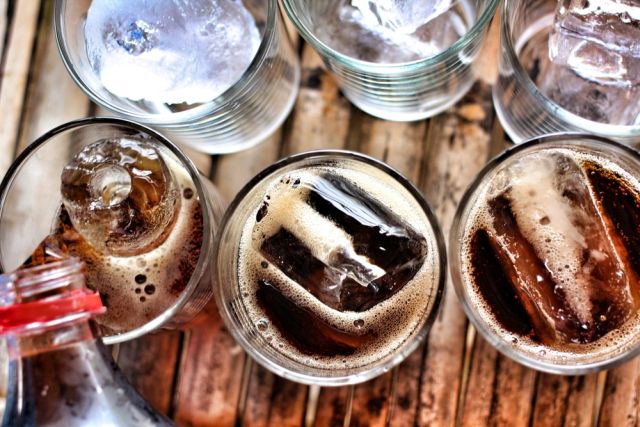 Look at all that 4-methylimidazole. (Photo by successo images via Shutterstock)

A chemical known as 4-methylimidazole, or 4-MeI, is found in tiny amounts of the caramel coloring in sodas such as Pepsi, Coke, Diet Coke, and Dr. Pepper, the Associated Press reports. Unsafe amounts of it has been known to cause cancer in mice, and Consumer Reports is claiming that the risk of people getting cancer from 4-MeI is 1 in 100,000, which is low, but significant.

Currently, the federal government has no law on the books for 4-MeI, but California has a law stating that products containing more than 29 micrograms of the stuff must have a cancer warning label. After conducting tests, Consumer Reports found that a couple of sodas went beyond that limit, including Pepsi and Pepsi One. Malta Goya, a non-alcoholic malt beverage, has almost 11 times more 4-MeI than California allows. None of them have warning labels.

An interesting note to the study is the difference in 4-MeI levels in different states. For example, Pepsi One has four times more of the chemical in New York than in California due to our state's regulations.

The results are huge because half of Americans, on average, drink 2 and a half sodas per day, according to a Gallup poll. So, even if you were to drink only two cans of Pepsi One, you'll still get more than the safe daily amount of 4-MeI.

Meanwhile, the AP is reporting that the FDA is retesting the sodas, and the California Attorney General is looking into the report. The blowback from the soda world is already happening: a spokeswoman for Pepsi told Consumer Reports that the report is wrong, since Americans only drink a fraction of the amount the study tested.

If the report proves to be correct, this will be just another notch on the big belt of delicious, yet cancerous things.

The entire process is explained in-depth in this video, courtesy of Consumer Reports: