19 Things To Do In Los Angeles This Weekend

LAist gets a lot of event announcements, and we comb through them all to bring you a curated list of what’s happening in LA this weekend. There are a number of art openings that piqued our interest this weekend, which should be awesome for all the art lovers in town for the Los Angeles Art Show and photo l.a. Read on for all the details.

FILM: The Hitchcock 9 returns to LA with a American Cinematheque in the series The Hitchcock 9, Plus 8. The Hitchcock 9 is all the director’s surviving silent films, screening at the Aero with eight of the director’s more well-known titles. On Friday, it’s Vertigo (1958) with Jimmy Stewart and Kim Novak; Saturday it’s The Lodger/ Strangers on a Train; Sunday is Spellbound/Notorious. All screenings start at 7:30 pm. Tickets: $11.

ART: There’s an opening reception at the Santa Monica Museum of Art on Friday for two exhibitions that celebrate the artists’ “legacy of abstraction”: Keltie Ferris: Doomsday Boogie and Xylor Jane: Sea Legs. SMMoA and VIP preview from 6:30-7:30 pm with the public opening from 7:30-9:30 pm.

HIP HOP CELEBRATION: Celebrate hip hop and b-boy culture with Cypher Adikts’ three-year anniversary party that takes over Think Tank Gallery this weekend. There’s music, art and a whole lot of dancing planned for the two-day celebration, including live music by Jungle Fire and the photo and art show event on Saturday, A Portrait of Hip Hop: From The Inside Out. Friday: 9 pm-1 am with $10 admission. Art show on Saturday from 6-9 pm is free.

COMEDY: Joey Coco Diaz does stand-up this weekend at the Hollywood Improv, both Friday and Saturday at 8 pm. (You might recognize him from the flick Grudge Match with Sly Stallone and Robert DeNiro.) Also on the bill are Ari Shaffir and Steve Simeone. Tickets: $20 with a two-item minimum. 18+.

MUSIC: It’s friends and family time with the folk-rock sounds of Miner on Saturday at the Echo. They’ll be playing tunes from their upcoming album Into the Morning (out on Feb. 25) and more. The group initally began with songwriter Justin Miner, his wife Kate Miner and brother Jeremy Miner, but has now expanded to include cousin Amanda Koosed (keys), and longtime friends Justin Krook (bass) and Dave Schechtman (drums and percussion). Also playing tonight are Aaron Embry and RT N' THE 44s. Tickets: $8-$10.

MUSIC: The LA-based trio Crooks on Tape play an album release show at the Bootleg Bar on Saturday. If you’re a fan of synths, samplers, loopers and imrovisation, then help the band celebrate the release of Fingerprint. Tickets: $10 advance, $12 at the door. 21+.

ART: We hear that the Chung King Road is the place to be on Saturday night for the LA Art Show Afterparty from 8-10 pm. The galleries will be open, drinks will be flowing and DJ Halo Psytribe plays the tunes. Free admission.

ART: Gallery Nucleus in Alhambra holds its first art show of 2014 with A Tribute to Little Golden Tales, in which artists have been asked to re-imagine stories from their childhood. It opens on Saturday and runs through Feb. 9. The opening reception is being held from 7-10 pm.

LUNAR NEW YEAR: USC Pacific Asia Museum holds its fourth annual Lunar New Year Festival on Saturday from 11 am-5 pm to celebrate the Year of the Horse. There are crafts, demonstrations and performances, including traditional Vietnamese dance by Lac Hong Performing Arts Group; Taiko drumming by Taiko Center of L.A.; and traditional Korean folk dance by Jung Im Lee Korean Dance Academy as well as the art in the museum’s galleries. Admission is free.

ART+FILM: On Saturday from 8 pm to midnight The False Gallery on Cahuenga holds a premiere of new animation music videos by LA street artists Haunted Euth and Smog City and an art show that features works by Haunted Euth, Tina St. Claire and SmogCity. Food, drinks and DJ set by The Hampton Beats. 21+. Free. 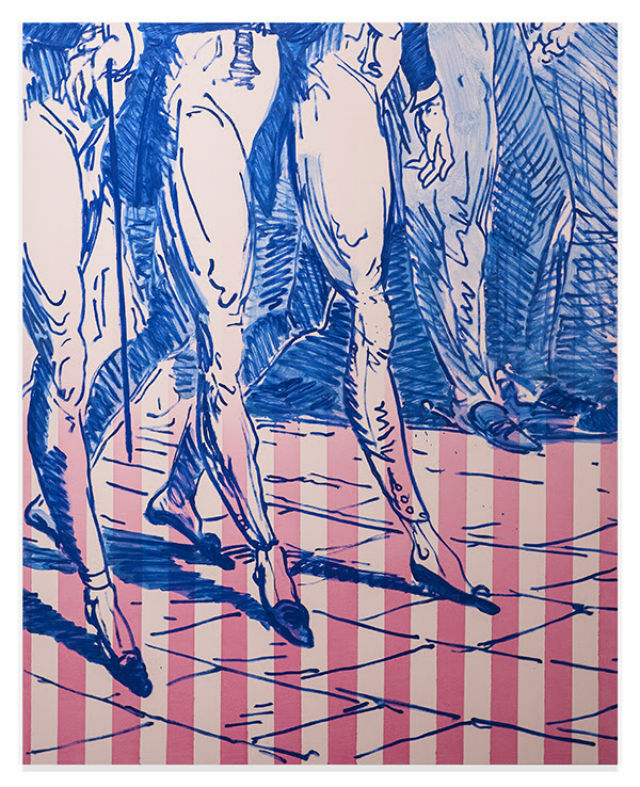 Charlie Billingham, Promenade 5, 2013, is one of the works on view at OHWOW this weekend. (Image: Courtesy of the gallery and the artist).

READING: ***THIS EVENT HAS BEEN CANCELLED DUE TO ILLNESS*** At 4 pm on Sunday at Book Soup, author Olivia Laing discusses and signs The Trip to Echo Spring: On Writers & Drinking. In her book, Laing explores the link between creativity and alcohol through the work of writers F. Scott Fitzgerald, Ernest Hemingway, Tennessee Williams, John Berryman, John Cheever, and Raymond Carver. She also “strips away the myth of the alcoholic writer to reveal the terrible price creativity can exert.”

MLK CELEBRATION: On Sunday, the California African American Museum celebrates the lives of Martin Luther King, Jr. and Nelson Mandela in Celebrating Pillars of Peace, from Jail to Justice. The museum will hold film screenings of MLK’s speeches as well as a 1990 speech Mandela made at the L.A. Coliseum. In addition to art in the galleries, there’s an art workshop and live performances by Ileana Garcia, Deepak Ramapriyan, the Three Angels Choir, Jung Im Lee Korean Dance Academy, Jewel Tompkins and Rev. Dennis M. Brown. Hosted by actress Jackeé Harry and actor Jeffrey Anderson-Gunter. Free. Doors at 11 am with performances from 1-5 pm.

TALK: At 11 am, the Center for Inquiry in Hollywood presents a talk by David Falk, astronomy instructor and Planetarium Director at Los Angeles Valley College (LAVC). He’ll discuss how astrology and astronomy, how they’re related and their differences. Cost: $8, students $4.

Ed. note: A previous version of this post had the Crooks On Tape show slated for Saturday, Jan. 18, when it actually was on Friday, Jan. 17. LAist regrets this error.