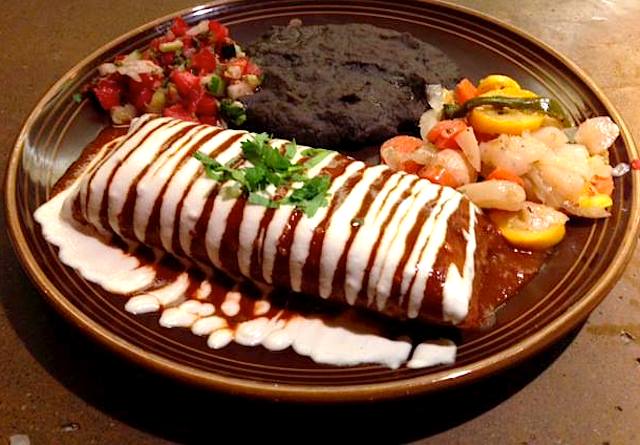 Mexican food might seem like the last cuisine that could get the vegan treatment, with all the lard that's notoriously used in the hearty, comforting cooking. But the folks behind Cafe Gratitude are going to be shaking things up, opening their new Gracias Madre cafe in West Hollywood this Friday.

The name is a nod to Mother Earth, and naturally the restaurant's focus will be on animal-free, locally-sourced cooking.

Gracias Madre is a massive 5,000 square foot restaurant that features high vaulted ceilings, wood trusses, brick walls, and a generous outdoor space, will be located at 8905 Melrose Avenue just west of Robertson Blvd. Chef Chandra Gilbert will be overseeing the kitchen, and there'll also be an extensive bar program crafted by Beverage Director Jason Eisner, formerly of Drago Centro. The bar will be a new addition to the Cafe Gratitude family, as neither the Larchmont or Venice locations have a full 47 license.

Gilbert helped open the first location of Gracias Madre, which is located in the Mission District of San Francisco. They'll be using produce from the restaurants' owners farm in Vacaville as well as local producers.

To start there will be small bites section of the menu called Bocados Pequeños like Mayan Pumpkin Seed Dip, as well as spicy marinated mushrooms, or Hongos con Chipotle. Then there are larger items as part of the Antojitos section, like Gilbert's Gorditas, potato-masa cakes topped with warm salsa verde, avocado, and cashew crema; Repollitos Con Quesa Fondido, featuring Brussels sprouts and caramelized onions baked in cashew cheese and finished with garlic breadcrumbs; as well as homemade Empanadas filled with grilled plantains.

As for mains or Principales, think stone-ground heirloom masa Tamales filled with sautéed butternut squash, poblano and onions, Chilaquiles, Enchiladas con Mole, Flautas, Sopas, and Tacos prepared with Gilbert's housemade stone-ground masa tortillas will round out the larger plates. There are desserts on offer too, including a boozy popsicle special of the day, or Paleta Del Dia, featuring mezcal.

Come to think of it, we could use one of those right now. Get here already, Friday.