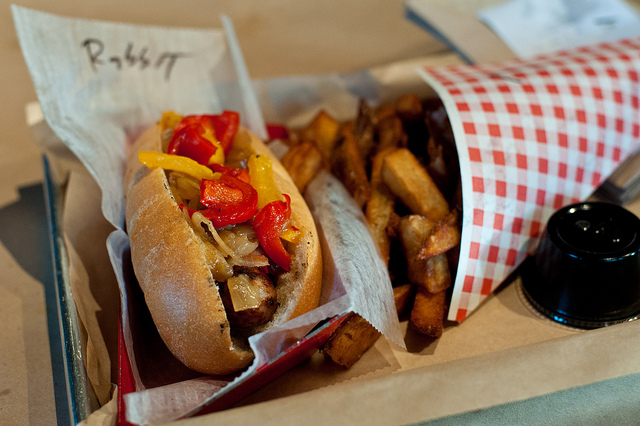 We all secretly love iconic hot dog joint/tourist trap Pink’s, which celebrates its 75th anniversary this year (HOT TIP: Go when it’s raining to avoid a line!). But tons of other new spots are popping up all over the city, with some mainstays having served up succulent sausages for years. Here are a few of our favorites (Note: We love sausages shops like Schriener's Fine Sausages, too, but we tried to keep it to sausage-centric restaurants):

The mother of all hipster sausage joints and biergartens has to be Wurstküche, which opened in Downtown’s Arts District in 2008 and has been the “purveyor of exotic grilled sausages” of choice ever since. Good ol’ fashioned brats are only six bucks, while those exotic links—buffalo, duck, rattlesnake and crocodile all make appearances on the menu—run for eight. A huge selection of German beers and patio seating up their game significantly. They’ve expanded into a Venice location as well, so you don’t have to drive across the city to get your fix, wherever you may be.

Tip: Plenty of vegan choices are available, though they’re cooked on the same grills as meat sausages. 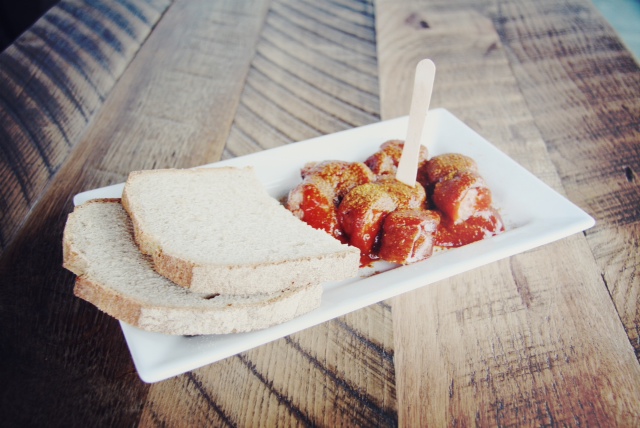 If exotic’s not your cup o’ tea, Berlin Currywurst’s selections are more typical, yet not less delicious. Pork, veal, beef, chicken or tofu make up the links, while customization options include a double portion (moving the price from $5.89 to $8.89), heat level (1 to 4), flavoring (fruity, chipotle, jambalaya, garlic or ginger-orange) and topping (minced onions or sauerkraut). The Silverlake location has outdoor seating on its Sunset/Hyperion corner, while the Hollywood location has a back patio biergarten with succulents and a fire pit. 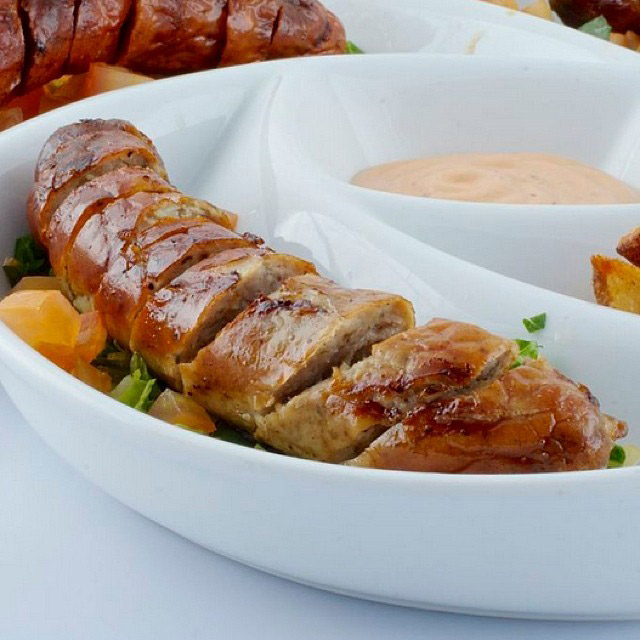 Not an ill-begotten Nu Metal band from the ’90s, but a new sausage spot in Atwater Village that opened in 2012. It may be accused of hopping on Wurstküche’s sausage-and-beer bandwagon, but you can’t argue with the goods: mouthwatering knachwurst and andouille, duck and wild boar for adventurous eaters, and a vegan selection that trumps the competition. A late-night happy hour (from 10 to midnight) includes large fries for $3, $5 brats and $4 brews. 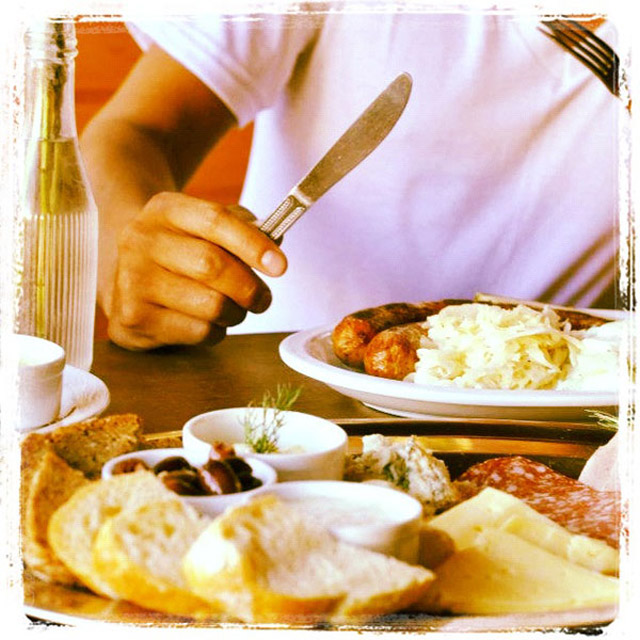 A tasty 'sage plate from Wirtshaus (Photo by www.wirtshausla.com)

Wirtshaus is new, opened in 2011, but not too newfangled—this is a real German restaurant, run by real Germans, and the menu accordingly skews toward traditional German wurst (you can still get vegetarian sausage, though). Expect a new-meets-old feel, with cute wooden tables (and one ping-pong table you can eat at!) as well as the occasional live accordion player, around Oktoberfest. 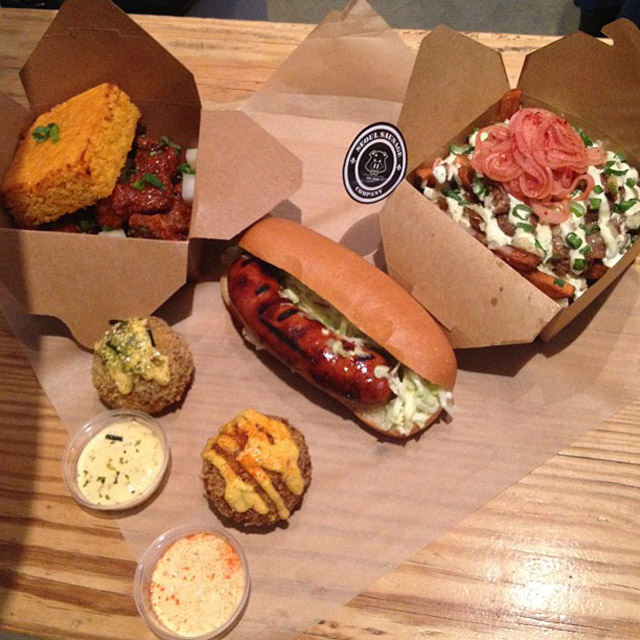 Much as Kogi put the Korean taco on the map, the Kim brothers (Yong and Ted) and chef friend Chris Oh have put Korean flavors into the beloved sausage, taking it around the country in a food truck and winning Food Network’s The Great Food Truck Race along the way. So what does their food actually entail? The simple menu includes seven-dollar kalbi sausages topped with kimchi relish and garlic-jalapeno aioli, as well as spicy pork sausages with apple cabbage slaw—and rice balls, Korean fried chicken and galbi poutine, for the non-sausage inclined. 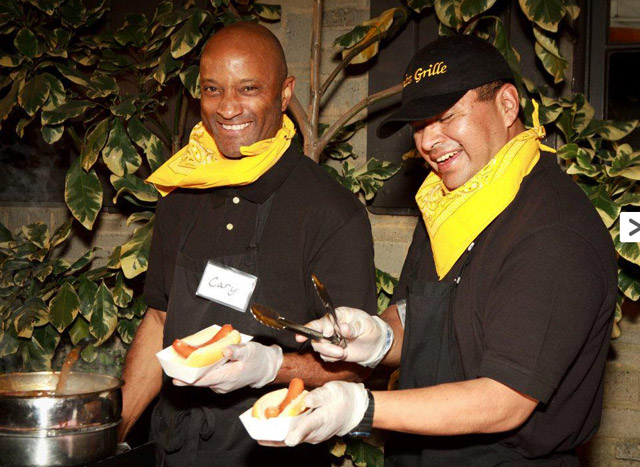 Earlez has been around for 20 years or so, starting as one of L.A.’s many beloved hot dog carts, but it recently has evolved into something more: a hot dog spot that gives equal play to its vegan cousin, the veggie dog, with vegetarians all over the cit city singing the praises of this Leimert Park joint. As one intrepid reader pointed out, the Leimert Park location has been closed to make way for the Crenshaw Line, but the restaurant will reopen nearby this year at 3864 Crenshaw Blvd.

Earlez Grille will be located at 3864 Crenshaw Blvd. in Leimert Park

The Sooo Cali dog from Dog Haus (Photo by Doghaus.com)

With a list of dogs and sausages inspired by pop culture—from the Scott Bailoi dog to the Das Brat—Dog Haus is a lot of fun. Dog Haus has more to it than just sausages—there’s a great beer selection, tater tots and $1 sliders at happy hour, which come on a Hawaiian roll.

The sausage platter from Red Lion (Photo by www.redliontavern.net)

Red Lion is known for being a great bar and German restaurant, conveniently located across the street from Cha Cha Lounge, but it’s home to tasty brats and bockwurst. Their most popular plate, the sausage platter, is like one of those dishes you hover around at a party until it mysteriously disappears— bratwurst, knackwurst and smoked bockwurst cut up into small pieces with toothpicks, served with pickles, peppers and mustard. 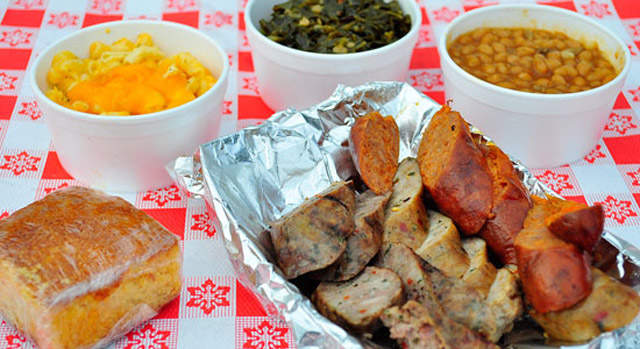 Bludso’s is a great place to get all kinds of barbecue, like brisket and ribs, but their chicken sausage and hot links are perfectly spicy and delicious. It was featured on Diners, Drive-ins and Dives, so you know it’s legit. They’ve opened a spot on La Brea now that serves alcohol, but if you want the original, head to Compton. However, the La Brea one is fond of roasting whole hogs for football games, so it's your call really. 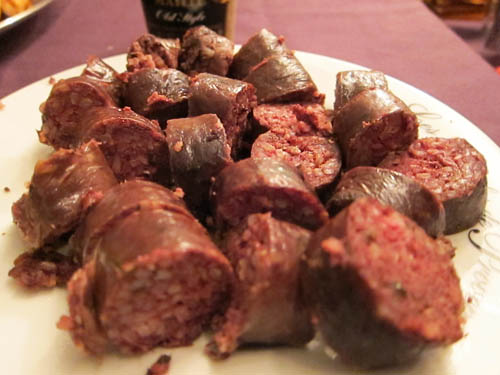 For the best soondae you’ve ever had (that’s blood sausage, not ice cream), head to Koreatown’s Eighth Street Soondae. Blood sausages are the main draw here, which might sound gross to the uninitiated—intestines stuffed with glass noodles, barley and pork blood—but once you try it the soft, meaty soondae, you’ll forget your reservations. If you’re not that adventurous, there’s also pig’s ear, liver and feet to satiate the weak-bellied.

Hungry yet? Pick one and head over for din din.