'The Wolf Of Wall Street': Scorsese's Takedown Of The American Dream Has No Bite 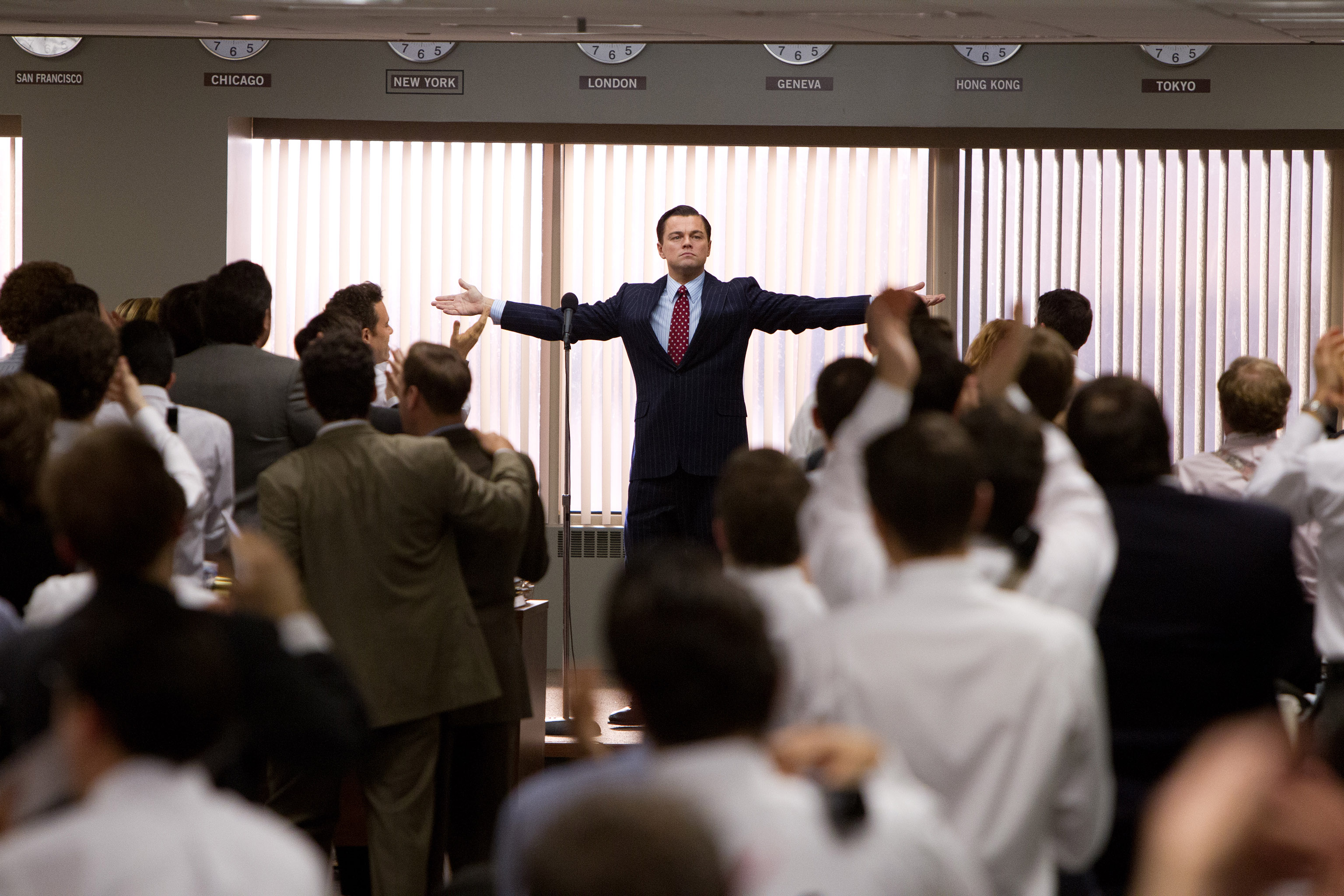 Warning: this review contains plot elements that some may consider "spoilers." However, since it is based on a well-publicized true story, they are discussed openly here.

If the theme of cinema in 2013 was The Year of American Capitalistic Decadence, then it worked out quite nicely that the summer movie season kicked off early with Baz Luhrmann's The Great Gatsby and the year closed out with Martin Scorsese's The Wolf Of Wall Street, both starring Leonardo DiCaprio as powerful men driven to a downfall in their quest for their own piece of the American Dream. Where the setting of The Great Gatsby was the Roaring Twenties before Black Tuesday wiped it out like divine judgment, The Wolf Of Wall Street takes us into the belly of the beast, a real-life contemporary tale of the unchecked greed that led us to the wreckage of our economy today.

DiCaprio portrays real-life convicted Wall Street fraudster Jordan Belfort, who makes his quick ascension in Wall Street running the boiler room of Stratton Oakmont and pushing worthless penny stocks on unseen victims. Belfort and his partner Donnie (Jonah Hill) are fueled on a steady diet of cocaine, Quaaludes, prostitutes, and, above all, the pursuit of obscene amounts of money. It's a wonder the two of them manage to accrue a nine-digit fortune (albeit, illegally) while never seeming to take a break from three-ways and tripping their balls off. In one of the funniest scenes all year, Belfort takes one too many Quaaludes and must literally crawl his way to his Ferrari in order to drive home and stop a phone call from happening; Jonah Hill choking on cold cuts and a "Popeye" cartoon somehow get involved. There’s enough partying, T&A, and stupid male hijinks in Terence Winter's script to make the cretins from the Hangover movies blush.

Instead of coming up with some sort of insight on the avarice of the American Dream, the first two hours of the film revel in it. It is not a fault of any particular film to indulge in the basest of pleasures, but The Wolf Of Wall Street makes an unconvincing 180 into something far more thoughtful in the final act once Belfort is busted by the FBI (the lead investigator played by a soft-spoken Kyle Chandler) and sobers up. It’s here the film touches on its most concise idea: how wealth destroys the family unit. When much earlier Belfort leaves behind his Long Island wife (Cristin Milioti, looking a whole lot like Lorraine Bracco in GoodFellas) for a blonde bombshell (Margot Robbie), he now has been driven so far to the edge that he abuses his wife and child both emotionally and physically. But like Belfort begrudgingly wearing a wire for the feds, this injected dose of seriousness feels mostly like half-baked ass-covering.

Martin Scorsese's celebrated career has been mostly one of depicting the downfall of men who suffer from the indignities of unchecked machismo (see: Raging Bull and GoodFellas, especially). The Wolf Of Wall Street seems to be as intoxicated by these transgressions as much as the dopes it portrays. As a drug or fratbro comedy the film delivers, but it falls short of the goal of depicting the destructive perversion that arises out of Wall Street run amok. Michael Bay's obscene and neon vision of the ugly masculinity of capitalism in the underappreciated Pain & Gain was, at the very least, more daring and less pandering.

After a short prison sentence Belfort is reborn as a motivational speaker, teaching paying audiences about legitimate and legal business techniques he apparently possesses. At one of his seminars, where he speaks to the same people that may as well have been his previous victims, the camera lingers on the audience for just a little bit to close out the film. Holding up a mirror to those of us in the movie theaters that have been entertained by three hours of men behaving badly, the shot lands with a thud. It’s not us but the filmmakers that need a moment to reflect on what we’ve just watched.

The Wolf Of Wall Street opens everywhere on Christmas Day