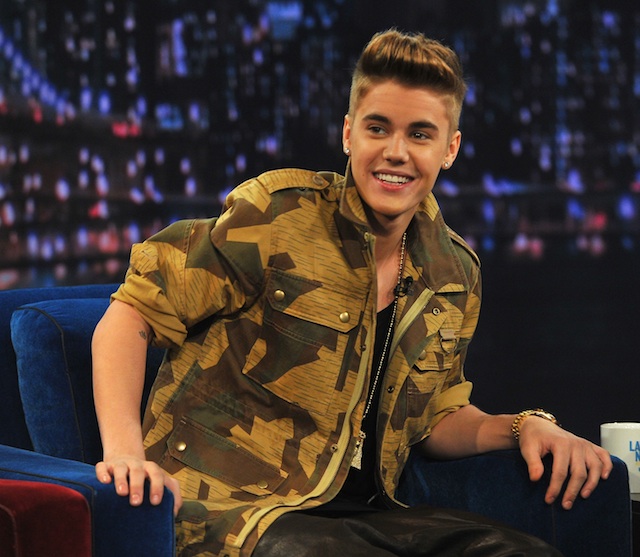 Yes, really. However, it might not be such a strange pairing as Bieber seems to be going on a graffiti rampage lately, tagging up some truly hideous monsters and brightly-colored cartoon blobs throughout the world—from Australia to Colombia and Canada. He was even under fire recently for spray painting what critics thought looked like a racist monkey.

Alec Monopoly, known only by his pseudonym, has been growing in popularity in the art world, though his critics say he's a sellout. His Instagram feed shows him hobnobbing with celebrities, shopping for expensive cars and stocking his fridge with bottles of Dom Pérignon champagne. Like Banksy and Shepard Fairey, he's made big bucks off of his graffiti. At his solo art show in L.A. in March, actor Adrien Brody walked off with $20,000 worth of paintings and he even scored $3 million for one of his works, according to TMZ and PBS.

Alec uses aerosols, newspaper, stencils and wheat-pastes, and the art pops with color. He hails from New York, but he left the concrete jungle for sunny L.A. in 2006 to get away from constantly being chased down by the NYPD for his tagging; he had been arrested a number of times and was on probation. Apparently, it's easier to do street art in L.A. In addition to using the Mr. Monopoly character from the board game, he uses pop-culture icons to represent different cities: Jack Nicholson for L.A., Robert De Niro for New York, and Twiggy in London. Banksy is his "hands-down favorite street artist," and he's also inspired by L.A.-based Retna and New York's Haculla. 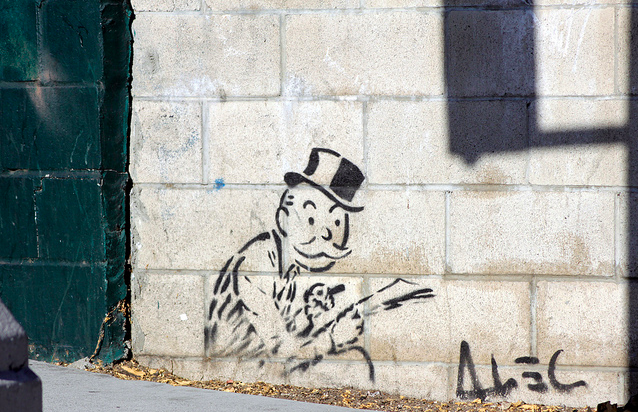 He identifies with the top-hat wearing Mr. Monopoly, even donning the hat himself at times. "In 2008, I was inspired by what was going on in the economy," Alec tells LAist. "The Monopoly guy [represents] what was going on in Wall Street, a lot of evil investors like Bernie Madoff. That’s what started off the Monopoly character for me."

Alec wouldn't say though that his art is speaking up against capitalism or embracing it, but that he'd rather leave it up to his audience to figure out the message. "I like making my work political, but at the same time I like making a positive message," he says.

Including this Bieber stunt, Alec seems to be cashing in on the capitalistic gains lately. Earlier this month, he hosted a Samsung-branded private yacht party in Miami's Art Basel and partnered up with The W Hotels to do live-paintings of photographs of Madonna. He says it's just a way to travel the world and spread his artwork to the masses.

As popular as Alec is, he still has critics who bash his work and compare him to his mentor Mr. Brainwash (a.k.a. Thierry Guetta)—who's received some flack for derivative and uninspired work. Jake Dobkin, our Gothamist publisher and resident street art enthusiast, doesn't think Alec is even as good as Mr. Brainwash and says, "Alec Monopoly is even a worse graffiti artist than Justin Bieber."

Still, Alec doesn't let the criticism faze him. "I don’t really pay attention to any of those critics," Alec says. "I try to pave my own way and focus on my own work. I don’t even read any of those hate comments. I stay in my own zone and forge in my own path, that I’m know in art history as Alec."