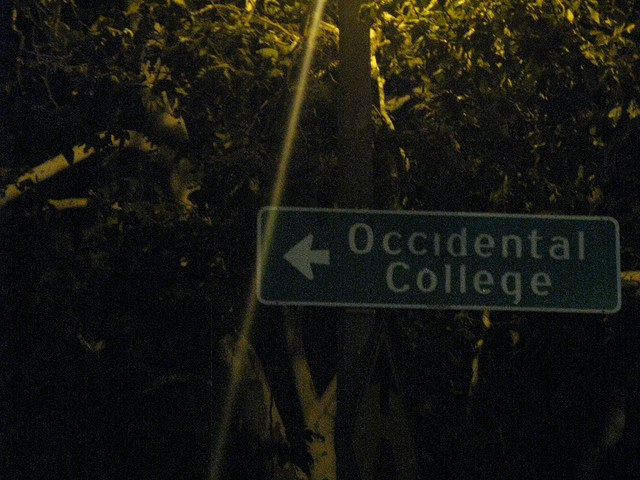 After being accused of discouraging students to report rapes and admitting to keeping rapes on campus secret, Occidental College tried to make it easier for people to report rape on campus. The college created an online form that would make it easy to anonymously report sexual assault—and now it is this form that Men's Rights Activists have decided to spam.

Occidental spokesman Jim Tranquada told LAist that the college noticed a problem starting on Monday night: they received about 400 reports over the course of 36 hours. And this is at a liberal arts schol with just under 2,200 students. And some of the reports were obviously phony. The volume alone was a sign that something was off, but so were the accusations: some reported that "feminists" or names like "Fattie McFatFat" had assaulted them. At first, the college wasn't sure where all the reports were coming from, but then some third parties did let the college know that they were being targeted by Men's Rights Activists.

A Redditor named ShitlordDon linked to the anonymous online form on the MensRights subreddit and wrote: "Feminists at Occidental College created an online form to anonymously report rape/sexual assault. You just fill out a form and the person is called into the office on a rape charge. The 'victim' never has to prove anything or reveal their identity."

That description isn't exactly true. It is true that the victim's identity is supposed to stay anonymous (though there have been questions about that), but no one will actually end up getting "charged" with rape on the basis of these reports alone (and of course, the college can't criminally charge anyone). The form itself says:


"If a perpetrator is named, a member of the Dean of Students Office will meet with that person to share that the person was named in an anonymous report, review the Sexual Misconduct Policy, and inform the person that if the allegations are true, the behavior needs to cease immediately. Information shared in this form alone will not result in anyone going through the grievance process."

Tranquada told LAist that the college does take each complaint seriously, and depending on the information in the form, they may open an investigation.

David Futrelle, the blogger behind the anti-misogynist blog ManBoobz, saved some of the posts from Redditors gleefully talking about their fake reports that have since been deleted.

Whether this form is an effective way to help Occidental College deal with a serious problem may be a fair question, but it looks like the Men's Rights jerks aren't so concerned with the covered-up rapes. In fact, they're targeting the very people who have been lobbying the administration to be more transparent. Redditor WhiteThrone wrote:


Step one: Get a list of every 'Feminist' at Occidental College who supported this system.
Step two: Anonymously report them for rape.
Step three: Watch them squirm as their lives are hanging in the balance over a false rape charge.
Step four : Shutdown the BS online form.

Futrelle writes, "It’s one thing to criticize an anonymous reporting system because of its potential for abuse; this is something else entirely."

Tranquada says that while it is speaking with its IT team, lawyers and its Clery Act consultants, it doesn't have any plans to change its policies for reviewing reports just because the volume is sky-high: "We will continue to review each report to determine if it is a good faith report."

(Eds. note: this post has been edited throughout to include comments and policy clarifications from Occidental College. The picture originally included with this post has been swapped, because it did not in fact show the college. LAist regrets the error.)

Related:
Occidental, USC Admit To Not Reporting Sexual Assaults On Campus
Occidental Students Protest The Way The College Notifies Them (Or Doesn't) About Rape
Occidental College Accused Of Discouraging Students From Reporting Rape