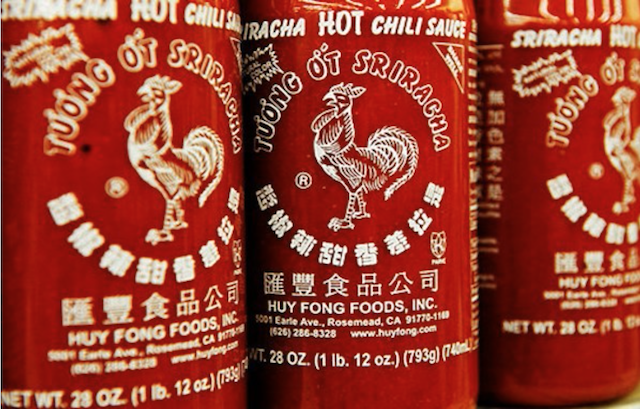 An update is below

The great Srirachapocalypse of 2013 continues to get worse: now, the California Department of Public Health has issued a 30-day freeze on shipping out the popular hot sauce.

The department has required that Huy Fong Foods hold off on sending out their products until mid-January as part of tough new regulations placed on the company, the L.A. Times reports. As of right now, the CDPH has offered no official explanation as to why they halted Huy Fong's shipping. Already, wholesalers and restaurants that depend on the Sriracha supply are reeling from the CDPH's decision.

"We have already received more than 30 angry phone calls today," Damon Chu, president of Giant Union, a wholesaler of Asian foods, told the Times. "It drives me crazy because this is the first time we have been in this situation."

The mandate from the department comes amid a battle between the sauce makers and the City of Irwindale, who have complained about strong odors emanating from the factory and irritating eyes and causing other ailments. In November, a Los Angeles Superior Court judge ordered a partial shutdown of the factory in response to Irwindale's claims, and Huy Fong Foods erected a snarky banner proclaiming they don't make "tear gas," a literal sign of growing tension between the city and the factory.

UPDATE 12/15: KPCC is reporting that the California Department of Public Health stopped the shipment of Sriracha and other Huy Fong Foods products for 30 days due to a manufacturing change at the plant. The delay is a technical procedure for the state to see if the acid levels of the chilis crushed in the new process are able to destroy harmful microorganisms in the sauce. Huy Fong agreed to the delay, and there is no need for a recall of existing Sriracha products.