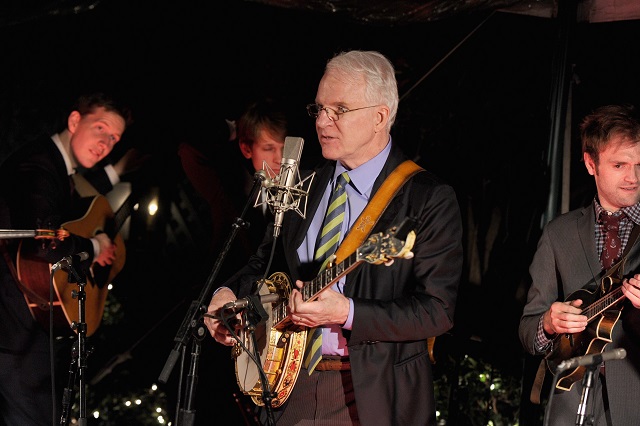 Steve Martin got on stage with the Punch Brothers to pay tribute to the Coen Brothers in Santa Monica. (Photo by Kevin Winter/Getty Images for CBS Films)

It's as if for one night, the Buffalo Club in Santa Monica was transformed into a 1960s folk club scene, as stars honored the Coen Brothers and music producer T Bone Burnett for Inside Llewyn Davis on Nov. 13. Barbara Streisand, John Goodman, producer Scott Rudin, among other stars joined in on the festivities, according to Variety. Even Steve Martin jumped on stage to display his banjo-plucking skills.

Inside Llewyn Davis has been making the rounds on the festival circuit, but will be hitting theaters on Dec. 20. The comedy-drama focuses on a singer trying to make it in the folk scene in Greenwich Village in New York in 1961.

Oscar Isaac, who portrays the lead role of Llewyn Davis in the film, performed along with the Punch Brothers on stage.

The crowd was ecstatic to find Martin join the Punch Brothers in some melodies.

Steve Martin joins The Punch Brothers onstage at the concert to celebrate INSIDE LLEWYN DAVIS... pic.twitter.com/k92LoEsion

Among other musicians harmonizing and strumming their guitars included the Milk Carton Kids.

Milk Carton Kids have half the crowd in tears at the Inside Llewyn Davis show... pic.twitter.com/zj2MxtsP2g

But really, let's get back to Martin because he's just amazing.