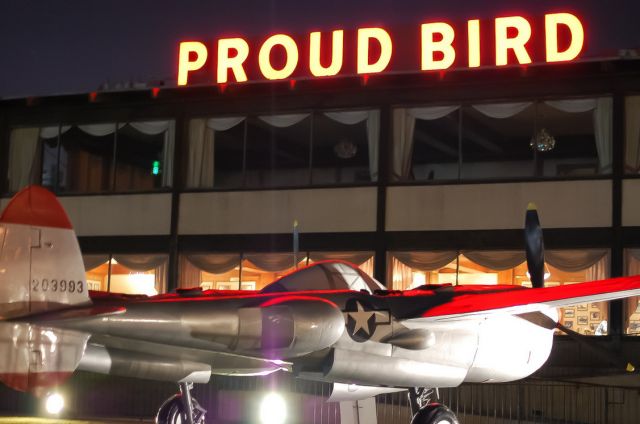 The Proud Bird. Photo by Todd Lappin via the LAist Flickr Pool.

A vital piece of LAX history is about to shut its doors for good. The Proud Bird, a popular restaurant and watering hole for aviation fanatics of all ages and backgrounds, will officially be closing on November 21.

The L.A. Times reports the restaurant has been in a tough financial spot for a while, as property values skyrocket in the area and competition from other restaurants intensify. After lease negotiations with Los Angeles World Airports fell through after two years, the restaurant was out of options.

The owner of the Proud Bird, John Tallichet, tried to re-establish a new 20 year lease on the old rent of around $200,000 a year, but the airport set the rent at $500,000 based on a marketing assessment, according to the L.A. Times. In addition to this, a city law mandates every airport business pay a "living wage" of $16 per hour, because the restaurant technically is on airport land.

Tallichet's father, a former pilot who flew a B-17 over Europe in World War II, opened the restaurant in 1958. It quickly became a favorite meeting spot for anyone in the aviation industry as well as people who wanted to watch the massive jumbo jets take off and land. The Proud Bird is home to an impressive shrine dedicated to the Tuskegee Airmen, and surviving members of the famous African-American pilot group still frequent the restaurant. Other famous pilots featured at the Proud Bird include Chuck Yeager, the first pilot the break the sound barrier, and famed female pilot Amelia Earhart.

If you want to experience the Proud Bird and get a glimpse of a one-of-a-kind vantage point that offers an excellent view of LAX, you'll only have 11 more days.