Video: Ramen Burger Creator Explains The Inspiration For The Most Viral Burger Of Our Time

Creator of the original ramen burger Keizo Shimamoto gave an exclusive interview to LAist to talk about this uniquely Japanese and American creation, his newfound fame, and why copycats out there should beware.

This has been the year of viral mash-up cuisine. Like the uber-viral Cronut that came before it, the Ramen Burger craze exploded on the East Coast. However, this particular mash-up has its roots in Japanese and Southern California cuisine.

A few years ago Keizo Shimamoto, a Japanese-American ramen chef from Huntington Beach, CA, quit his job and moved to Japan to study the art of ramen. After four years and a thousand or so bowls of ramen later, Keizo moved to New York to fuse two of his childhood loves together: ramen and the hamburger. Keizo serves up the Ramen Burger Saturdays at Smorgasburg in Williamsburg but he and his burger pop up at locations all over the world (that you can find out about on his website).

Despite its SoCal influence, the Ramen Burger has only made three appearances in Southern California as pop-ups. Each time the burger was sold out within the first few hours, leaving a trail of disappointed customers empty-handed, but Shimamoto tells us that his Ramen Burgers may be making a more regular appearance here soon.

LAist: Did you realize beforehand that the Ramen Burger would be such a sensation?

Shimamoto: When I came up with the idea to add a beef patty to the noodle buns, I knew that Americans would immediately embrace the new combination of Japanese and American food cultures. I was reminded that all great burgers have beef patties.

What makes your Ramen Burger special?

I spent 4 years in Japan studying ramen. It’s something I really took pride in making. I really concentrate on the ingredients. We’re using fresh ramen noodles, I have a really good secret shoyu sauce that we use and it pretty much just makes the burger. The ramen noodles stay together as a bun, but when you bite into it, it falls apart. That’s something the copycats were not able to do. 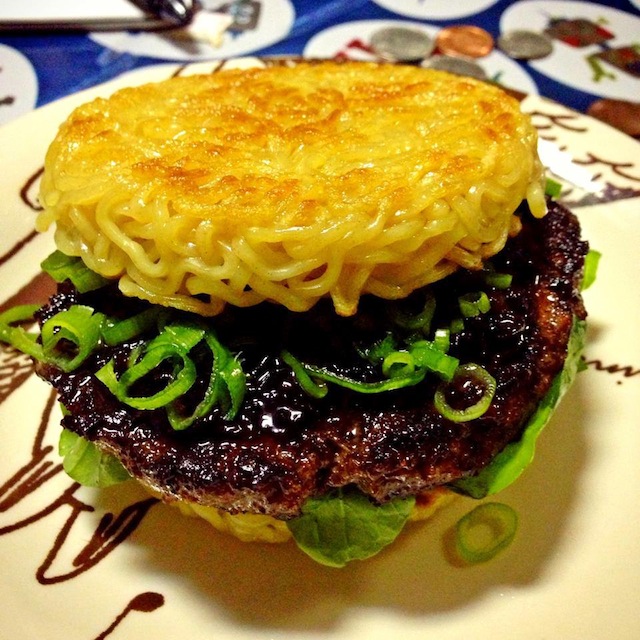 What do you think of people waiting long periods of time for food?

I think that people want to always try great food and if it is presented as the next big thing, I am all for it.  I would also wait in line for the Ramen Burger.

The Ramen Burger is sold out every single time you guys show up so why do you only make 500?

The noodle bun making process for 500 Ramen Burgers requires almost 17 hours in order to do it correctly.  Add to that, the sauce takes and additional 4 hours and preparing any more than 500 in a weekend would require an army of employees.

Have you ever had a Cronut? What did you think?

I did and I thought it was good.  But, it doesn't compare to a Ramen Burger.  They are different things with completely different tastes and concept.

Are you opening a Ramen shop in NYC?

We are in discussions with investors and real estate agents regarding opening a storefront in NYC and LA.

What's your favorite burger in NYC and L.A.? And ever?

Black Shack Burger on 320 Lex in NYC and In-N-Out in L.A. Ever? Ramen Burger!

Are there any flavors/new things you've been trying with the ramen burger?

We've offered limited items such as bacon on National Bacon Day (August 31st), a bratwurst patty for Oktoberfest and most recently, white American cheese.  They have all been successes and sold out immediately!

When do you think the next SoCal event will be?

I am working with my brother, sister-in-law and other SoCal chefs to bring Ramen Burger to LA on a more permanent basis.

When it first came out, people rushed out to copy it. They kind of rushed into what they doing trying to make and they didn’t make it properly so it doesn’t get as good as ours.

How are you dealing with the copycats who are selling knock-off Ramen Burgers?

My brother Jeff is a finance attorney and he is working with outside IP counsel to structure an organized response to any person or store using the Ramen Burger Trademark without our permission. He doesn't take these things lightly, so I am sure he is taking care of things behind the scenes.

What’s your goal ultimate goal with the Ramen Burger?

The goal is to really educate Americans that there is really more out there than just Top Ramen and Instant Ramen and just make good food and make people happy!

Born and raised in Los Angeles, California, Kristie Hang is an avid world traveler that spends 3 months a year in Asia. She has an affinity for bizarre foods and is also the co-founder of the 626 Foodettes Blog, a hyperlocal food blog highlighting culinary options in the San Gabriel Valley. You can follow her on Twitter, Instagram or Facebook. The video above was edited by Lance Heruela.