If you live in (or regularly visit) West Hollywood, you've seen a whole lot of construction going on, some of it concentrated all within a few blocks. Taking a look at the city's map of planned projects, there's much more planned.

Unfortunately, with four projects already underway on La Brea Avenue, and two or possibly three more in the works, construction delays and headaches could rival that of 2000, when the massive improvements were made to Santa Monica Boulevard. Already, residents are dealing with traffic being narrowed down to one lane or stopped altogether. Since these projects are back-to-back, avoiding La Brea has been a must in the last year or so.

I put in a call to John Keho, Assistant Director of Community Development in West Hollywood. I asked whether there's a cap on how many projects can occur at one time in one area and he explained that there isn't.

"Each project has its own mitigation requirements," he said. "The city does not have any regulations that limit the number of construction projects at one time. Off and on that issue has come up," he explained, saying it was last an issue regarding the Sunset Strip in the '90s, "but it's very difficult to figure out how to do that because obviously we're not the ones in control of when money becomes available. The city can issue building permits for a certain time period," he said, but can't control when construction actually begins.

Given that each new project will likely impact traffic, he said that for each one a "trip generation" is created and if it looks like it will cause "significant problems," in terms of traffic, then they won't approve it. (So none of these projects will significantly impact traffic, according to the city.) They also encourage people to use alternate means of transportation. He pointed out that the city tried and failed to convince MTA to run the Metro through West Hollywood as well as Hollywood.

As far as people who are upset about what seems like endless construction, he said, "I can certainly sympathize." He says that the city tries to make sure each project has "minimum disruption."

Here's a list of projects in two areas—the Sunset Strip and the already heavily impacted La Brea/Santa Monica intersection—but as you can see on the map, many more projects are planned or already under construction in WeHo overall.

LA BREA/SANTA MONICA
The "West Hollywood Gateway" area forms the easternmost border of WeHo with Hollywood. The Target complex opened in 2004, paving the way for massive reconstruction of nearby businesses.

1. 1222 La Brea Ave (former site of Jon's grocery store)
Project Description: Mixed-use project with 18,159 sf of commercial space and 187 apartment units.
Status: Under construction
Background: What was once a Jon's grocery store with an open parking lot is now a multi-story complex built all the way out to the street.

3. 7113 Santa Monica Blvd
Project Description: Mixed-use project of 12,808 sf of commercial space and 184 apartment units.
Status: Under construction
Background: Right across from Target. Former businesses include Yummy.com and a seamstress.

4. 1041 Formosa Ave (The Lot)
Project Description: Demolish three structures to build 100,000 sq. ft. creative office/media support building. New 100,000 square foot creative office/media support building.
Status: Construction halted
Background: Preservationists tried to stop the tearing down of historic buildings on this lot, which was once home to Mary Pickford and other silent film stars, but they did not prevail. Since the street also houses a DMV (where traffic often backs up trying to get into the parking lot) traveling on Formosa during construction has been an absolute no-go.
UPDATE Although construction had begun, it's since been halted due to, as Sal Gomez, co-founder of Save The Pickford Fairbanks Studios says, "CIM failing to file a continuation of their previously approved comprehensive redevelopment plan. These new plans are currently being reviewed with public comments and hearings still to come. We the preservationist have not failed and are not giving up."

5. 7141 Santa Monica Blvd (Faith Plating)
Project Description: Redevelopment of an approximate 57,965-square-foot site into a mixed-use project with 166 rental units (including 33 affordable units).
Status: Approved, but not yet under construction
Background: Concerns remain about the toxic leftovers from Faith Plating, which, since 1935, had been one of the world's largest replaters of chrome automobile bumpers.

6. 7300 Santa Monica Blvd (Movietown Plaza)
Project Description: Mixed-use project containing 22,500 SF of commercial, 294 condominiums, and 76 affordable units.
Status: Construction fences were up as of October 31. Demo can't be far behind.
Background: The shopping plaza slowly emptied of nearly all its clients, except for the Trader Joe's, the first in the area, which closed its doors August 31. This project was in the works for years but stalled out due to developer issues. Two ten-story units were originally planned but those were scaled down to seven. 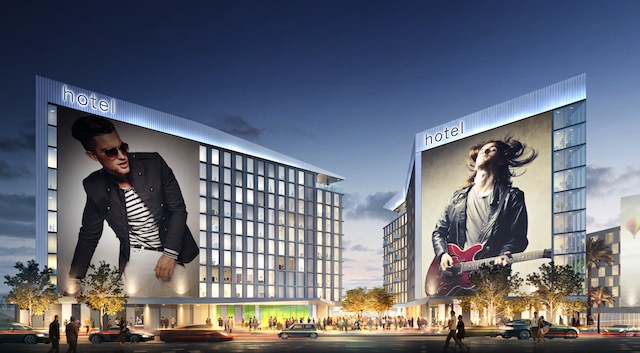 SUNSET STRIP
The busy Sunset Strip is home to some of the most famous clubs, restaurants and hotels in the city and WeHo plans to dramatically redo the strip with these numerous high-rise projects.

10. 8760 Shoreham Dr (off Sunset Blvd.)
Project Description: Demolition of existing buildings and construction of 11-unit condo
Status: Approved, but not yet under construction
Background: According to real estate site Zillow, this is currently a duplex and production office.

11. 8497 Sunset Blvd
Project Description: Mixed-use project.
Status: Approved, but not yet under construction
Background: According to Curbed LA, this would require knocking down an existing 31-unit housing complex and putting up 9,200 square feet of retail and restaurant space and 34 new condos.

This building at Sunset and La Cienega will be razed to make way for a hotel-retail complex http://t.co/QfapFyrw5C pic.twitter.com/SeTMhkFymm

12. 8490/8500 Sunset Blvd (Sunset La Cienega Project)
Project Description: Mixed residential and retail. As we reported in August, this project will include
two 10-story hotel towers with up to 296 rooms on the east side of La Cienega and two eight-story residential towers with 190 units on the west side, both with ground floor retail and underground parking.
Status: Approved, but not yet under construction. Businesses in the existing buildings have already moved out.
Background: Formerly known as the Sunset Millennium.

15. 8305 Sunset Blvd
Project Description: Construct an approximately 13,000 sq. ft commercial/retail/restaurant building. According to Curbed LA, it would include would include a 11,691 square foot commercial building, a restaurant on Sunset Blvd and 177 parking spaces.
Status: Approved, but not yet under construction.
Background: This is a vacant lot next to Cabo Cantina.