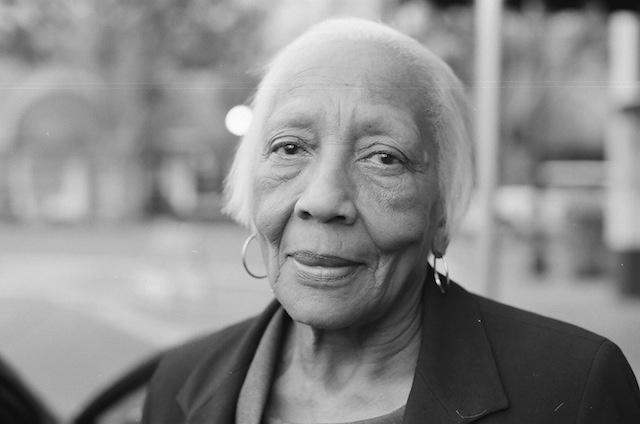 (Photo via 'The Life and Crimes of Doris Payne' Facebook page)

Doris Payne, an 83-year-old woman with a five-decade career as a jewel thief, is back behind bars. The octogenarian is already the subject of a documentary and is set to be played in a feature film by Halle Berry.

Payne, who claims to have stolen jewelry from New York to Monte Carlo, was arrested Wednesday after allegedly stealing a $22,000 ring from a jewelry store in Palm Desert, KTLA reports.

Doris Marie Payne was arrested Tuesday on suspicion of felony larceny, according to the Riverside County Sheriff's Department, for a theft that occurred on Oct. 21 at El Paseo Jewelers in Palm Desert.

She's supposedly stolen $2 million worth of jewels in her lifetime.

The arrest is great publicity for the new documentary about her, The Life and Crimes of Doris Payne, which just played the Austin Film Festival. "People have called her a sociopath, a psychopath. I would say in the common understanding of narcissism, yes she is a narcissist,” the doc's co-director, Matthew Pond, told NBC 6 in Palm Springs.

She was born in the South in the segregated '30s, says Pond, and decided to have the kind of life that society wasn't going to let her have, even if it meant stealing to get it.

"Here we are again. I honestly can’t say whether or not she'll steal again,” said Pond of her latest arrest, telling the Desert Sun that she had previously sworn to him never to steal again because she didn't want to go back to jail.

In 2010, it was announced that Halle Berry would be playing her in a feature film, but the film hasn't yet been made. Pond says, "If she had her way, she would have had Queen Latifah play her in the movie but only if she were skinnier."

Pond told the Sun that Payne occasionally threw away jewelry she'd just stolen. “It’s just one big giant make-believe and one big, giant makeup session,” he said. “In her mind, she’s a teenager at heart."

Payne is being held at the Robert Presley Detention Center in Riverside in lieu of $45,000 bail. The ring has not been recovered, according to the Desert Sun.