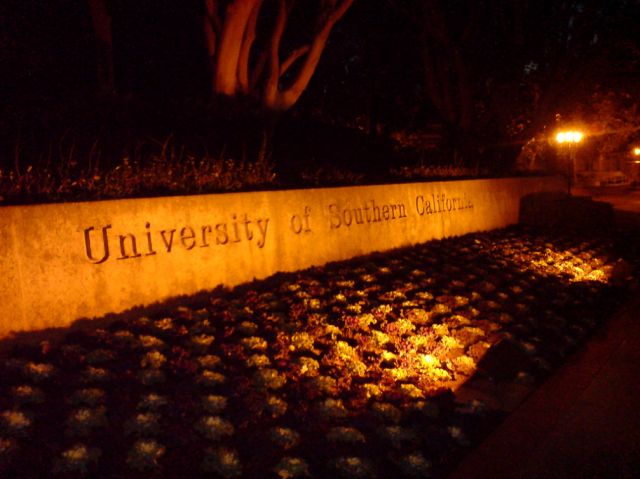 (Photo by sandeep_shenoy via the LAist Featured Photos pool on Flickr)

A group of USC students are rebelling against the panopticon-like safety measures taken by the university in the name of extra security.

The measures were created after two separate incidents last year: A shooting at a Halloween party that left four people wounded and the killing of two graduate students last April.

KPCC reports that the new security additions to the campus include a fingerprint scanner, license plate readers, security cameras and random ID checks. Campus police are also strengthening ties with the LAPD to patrol communities surrounding the campus. But the centerpieces of the new fortified campus are a series of gates surrounding the campus that were erected last January. The gates are intended to lock the campus from 9 p.m. to 6 a.m.

With the construction of the gates, many have accused USC of closing itself off to the surrounding community. Allegations of racial profiling, which are not new to the campus, have also permeated talks of the new security measures. In an L.A. Streetsblog article published last January, a young African-American resident of the area claimed that he was stopped and profiled so many times that he now avoids the area.

On Twitter, students are using the #USChangeMovement hashtag to bring attention of the security measures to university president C.L. Max Nickias.

"USC is a community space," USC graduate student Makiah Green said to The Daily Trojan. "Community members who have been here for years can't access the space anymore. We are in someone else's neighborhood. It's not our neighborhood and to restrict access all of a sudden sends a very harmful and disrespectful message."

A student-organized petition, "Take Down the USC Gates," currently has 387 supporters, but has yet to provoke a response from university officials.

In addition, many on campus are saying that the mandatory security fees - $57.50 per student per semester - are too expensive and should be used for other things on campus.

KPCC has reported an overall decline in crime statistics on campus since 2008.