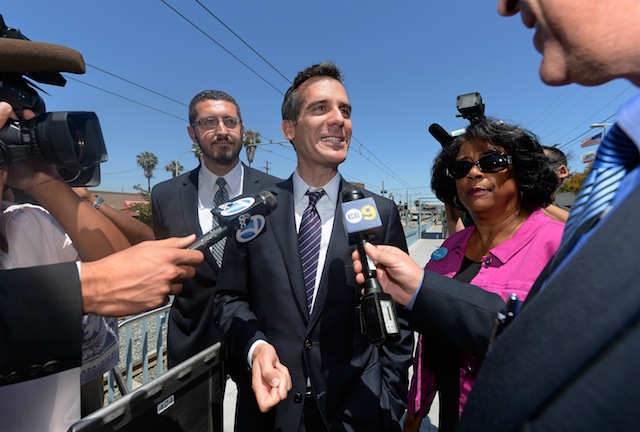 MAY 20: Eric Gracetti speaks with reporters on the platform of Metro train station during a campaign stop on May 20, 2013, in Los Angeles, California. (Photo by Kevork Djansezian/Getty Images)

Mayor Eric Garcetti is taking aim on cyber attacks that could cripple the airports, harbor and other city services.

In his second executive directive, Garcetti called for the formation of a Cyber Intrusion Command Center to be headed by the mayor's office and include all city departments with a collaboration with the FBI and the Secret Service. According to the directive:

The nature and extent of each department’s involvement will depend on the nature and extent of their cyber assets, with those deemed to have the most critical assets being more heavily involved in this collaborative effort. It is not acceptable for any City department to withhold information from the Cyber Intrusion Command Center regarding cybersecurity issues.

"Today, our traffic lights, our routing system for trash pick-up, and so much more are electronic," Garcetti told City News Service. "Cyber-security means protecting the basic services at the core of city government, and it means protecting our critical infrastructure like our port and airport, which we know are top targets."

The mayor's office will work with department heads in the next month to to develop a more detailed structure of the Cyber Intrusion Command Center.