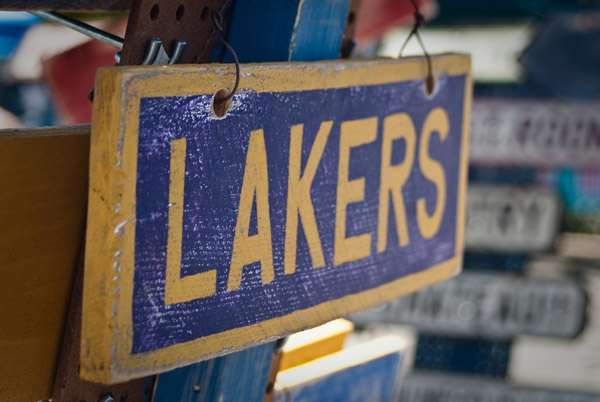 The Clippers had no excuse to lose this one the way they did.

Their season opener saw them face a Laker team that is a shadow of their former glory, the banners hanging from the walls of STAPLES Center essentially taunting the team in gold. This was a Laker team that doesn't have Kobe Bryant in their immediate future. They started Shawne Williams, known more for his pot and codeine busts, as their starting strong forward.

In the opening quarter it was basically a Pau Gasol vs. J.J. Redick showdown. Even Gasol got in on the action with a three-pointer at the top of the key. But the first indication that things weren't going to go how we expected came very early on:

The Lakers kept the game close throughout three quarters, but the bench out-hustled, out-rebounded, out-defended the Clippers 41-24 in the fourth quarter. The Lakers had 12 rebounds, six of them on the offensive side of the floor. The Clippers only had four.

But if you claim to be a championship contender, you can't give up 41 points in a quarter to anyone much less the Lakers.

Xavier Henry had a career high 22 points leading all scorers. The Lakers bench outscored the Clippers bench 76-34. Remember when the Clippers bench was the gem of the NBA? I'll allow that Lakers head coach Mike D'Antoni was toying with his rotation having no real idea how they would react in a real game situation. So that bench margin could be a bit inflated.

We can't make any sweeping generalizations from this one game. I doubt the Lakers can sustain this. It's hard to get career nights from your bench players night after night. It's hard to play with the energy level they played with tonight.

There are many variations of a certain saying, "You can take the boy out of the circus, but you can't take the circus out of the boy." That pretty much applies to Donald T. Sterling and the Clippers.

The Clippers finally started to emerge from the Lakers shadows last season. Then they hired head coach Doc Rivers to bring even more credibility.

Rivers helped facilitate a three-team trade that would send Caron Butler and Eric Bledsoe to the Phoenix Suns, the Suns Jared Dudley and the Milwaukee Bucks' JJ Redick to the Clippers and a Clippers second round draft pick to the Bucks. Everyone agreed to this, and it was ready to go. Until, according to Adrian Wojnarowski of Yahoo! Sports, Sterling vetoed the trade.

That's why you can't have nice things Donald.

Everyone involved was pissed off, but Rivers managed to convince Sterling to change his mind. The trade was revived and done. And all is well for the Clippers, for now.

But you know at some point, Sterling is going to press the self-destruct button. It's his way. It's the Clippers way. That's why when I see that all 28 ESPN "experts" predicted the Clippers to win the division and half of them picking the Clippers to go to the Finals, I have my doubts.

Hell, you look at this season opener against the Lakers, and you can see the doubts.